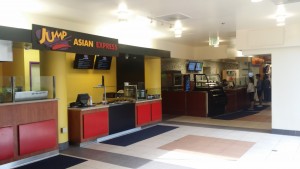 CSUSB Dining Services provided by Sodexo, a multinational food corporation, have earned an “A” rating in health inspections since November in 2012, but consistently misses the mark in food holding temperatures, maintaining equipment and utensils, and other areas, according to health inspection reports obtained from the San Bernardino County Department of Public Health.

In the most recent inspection of the Coyote Cafe in the Santos Manuel Student Union (SMSU), the San Bernardino County health inspector observed chicken strips being held at below the mandated temperature of 135 degrees and above, according to the report obtained from San Bernardino County Department of Public Health.

Past inspection reports, with the exception of one dated December 12, 2014, show a pattern of food being held at improper temperatures dating back to November 2012.

“The food temperature issues were with sandwich coolers that were running above 40 degrees. That means that the air in the machine was over 40 degrees. The machines were fixed the same day and have been running at the correct temperature,” said General Manger of Dining Services at CSUSB, David Janoksy.

“We do daily refrigerator logs to ensure that they are running properly, but as the weather gets hotter they sometimes ice up and do not work as well.

At that time the product was removed until a repair company could visit us and fix the unit, we get same day service.

The reason they begin to ice up is that they are ‘open air’ units. That means they have to work harder than a closed door unit,” said Janosky.

Janosky also said “We have all of our food on a time control. That means that after hazardous food has had the internal temperature taken and is safe for consumption, it is only kept for a total of four hours and then discarded. Due to our high volume, we rarely discard food.”

Every health inspection since November 19, 2012, to the most recent dated April 15, 2015 shows either the use or improper maintenance of utensils and equipment in the Coyote Cafe.

The most recent report states that an “ice scoop [was] stored on top of a wiping cloth that contained debris,” according to the San Bernardino County Department of Public Health.

An inspection report from December 12, 2014 stated that “tongs used for raw chicken stored in room-temperature water near [a] grill” were observed.

Other repeated violations include dust and debris buildup in vents above grills, as well as ceilings and walls that are not properly maintained.

However, according to a contract between Sodexo and CSUSB obtained by the Coyote Chronicle, Sodexo is only responsible for the cleaning of the “serving concession area, small equipment, floors, not windows, ceilings or walls above waist level,” leaving the responsibility of the buildup in vents as well as the ceilings and walls (above waist level) on CSUSB, not Sodexo.

According to Janosky, Sodexo has a contract with the National Sanitation Foundation (NSF) to do surprise audits at all Sodexo locations and this particular Sodexo location has passed food and physical safety audits with high marks since their contract began with CSUSB.

The Commons is expected to undergo changes over the summer.

Janosky stated that “Dining Services is currently looking to significantly improve the look and culinary approach to the Commons.”

JUMP Asian Express in the Coyote Cafe is also expected to be switched out, the new brand that will take its place has not been announced yet according to Janosky.