Alpha Delta Pi (ADPi) sisters and Sigma Phi Epsilon (SigEp) brothers hosted the Live Your Oath campaign at California State University, San Bernardino to make a promise to always ask and give consent by signing their names onto a form.

The majority of sexual assault victims are under 30 years old and that’s the general age range of these college students with one out of every six victims are female and one out of ten victims are male.

Director of Social Enrichment from ADPi, Audrey Huizar, and Vice President of Programming from SigEp, Daylon Ruiz, led the presentation about alcohol use, safe sex and consent. This workshop took place on Thursday, Jan. 10 in the Health and Physical Education building.

Gathered to make a pledge to prevent sexual assault on campus. This was specifically held for the women of ADPi and the men of SigEp, so they can later go on and spread awareness to the rest of the students on campus the following day. 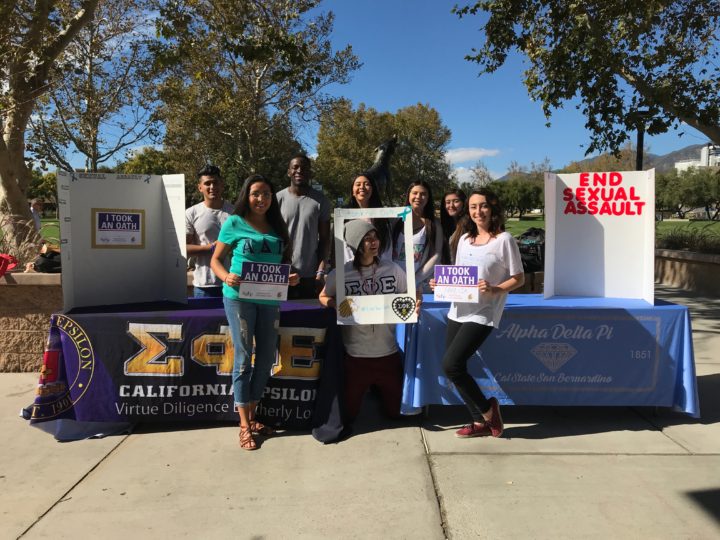 These sorority sisters and fraternity brothers all across the United States do their best to make a difference, but CSUSB greek chapters haven’t hosted and promoted this type of event on campus in a few years. Both organizations met up and began to discuss the importance of how sexual assault is affecting so many students these days and establishing that they want it off their campus now.

Everyone was assigned to sit in a male, female, male, female order so they were able to have a chance to mingle about the topic and provided interactive activities to really get the whole group to think about different situations they can face. The whole room was filled, leaving no empty seats.

Kelsie Gonzales, an ADPi member and sociology major that thinks that by teaming up we can have more people join and take action.

“I believe that there is strength in numbers because having both ADPi and SigEp taking part in spreading awareness to prevent sexual assault allows us to apply our values to this challenge,” said Gonzales. “By having both of our organizations involved, it encourages more people to listen and take part.”

Huizar searched for a clip on the internet that she was sure many of the attendees have seen before called Tea and Consent. This video explained how one must be sober and in the right mindset in order to give their consent to do anything.

The Tea and Consent video is a little humorous but educates the confused ADPi’s and SigEp’s who have none to little knowledge about the dangers of sexual violence.

Health centers or clinics on college campuses give out “family packs” to students that contain condoms and other necessities to be protected.

Saul Fuentes, a SigEp brother, is a kinesiology major explains that “family packs” should be given out with a warning so students can make smart choices.

“When given ‘family packs’, students should be reminded about safe sex and consent,” said Fuentes. “Either verbally or with a note attached to the bag.”

Majority of people believe that only women are the ones who are affected by sexual assault but the number of men who are sexually violated increase every single day.

On Jan. 11, both of these greek chapters were catching people’s attention and selling bracelets for $2. These ladies and gentlemen asked other students who were walking by to make an agreement to live their oath in front of the San Manuel Student Union.

Breanna Lane, ADPi sister, is a sociology major explains how by coming together we can make a difference.

“I do believe that by us promoting this campaign and tabling will get other greeks and non-greek members to take an oath and stand that it does promote awareness for sexual assault,” said Lane. “It may not be a big step, but every small step counts and the more aware that we can make individuals about these issues the less they’ll happen hopefully because if bystanders are educated on what is right then maybe they’ll be able to step in and help someone in the future.”

The bracelets were blue with white writing that stated: “Live Your Oath” and included the hashtag “#ADPiSigEp” all around.

Nearly 200 bracelets were sold that day from the hours of 12 pm to 3 pm. Huizar announced that if sisters from other college campuses wanted to purchase one, they could be found online and will be shipped out as soon as possible.

There were also two huge cardboard posters where peers can write their name down and agree to live their oath. Everyone who walks by will be able to see the names of those who are proudly taking a stand to end this fight and will hopefully encourage others to do so as well and join this movement.

Audrey Huizar, an ADPi member, is a biology major and explains why tabling was a good idea to do after the workshop to spread awareness and sell bracelets.

“Tabling was the best idea after the workshop because the workshop was made to help inform both chapters about this topic on ways to prevent it and different resources,” said Huizar.

“Tabling also helped us spread the topic out to our community and peers and to inform them next on what we learned and took away from the workshop; I decided to make the bracelets last minute, but with the intention of when wearing them we will always be reminded to live our oath every day,” said Huizar.

This is a great way for individuals a part of greek life to receive better public images for their chapters because they are spreading a positive message that will affect others in the long run.

Elisa Cortez, a sister in ADPi is a sociology major and explains why she decided to make this promise.

“I took this oath because this is a big issue in college and sexual assault happens everywhere,” said Cortez. “It was a good idea to work with the gentlemen of SigEp because together we got to learn how to stop sexual assault if it happens or where to turn to.”