As technology develops, children are being exposed at a much younger age to smartphones and tablets which can ultimately expose them to the harm we try to protect them from.

In the last decade cell phones and tablets have become easily accessible and more common in every household and parents now face the question, “what age is appropriate to give my child a phone or tablet?”

According to Influence Central, 2016 research shows that children around the age 10 through 12 receive their first smartphone.

Technology is a becoming an essential part of our everyday lives, even for adolescents.

“It’s upsetting to me that parents don’t realize 10-year-old children should be protected from social media and online predators,” said Claudia Moore, elementary school aid and mother of two.

“Handing them a device makes it easier to know where they are but it also exposes them to great dangers via the web.”

Children with access to smartphones and tablets also have accessibility to communicating with the outside world, which can create issues containing cyberbullying, cat fishing and sexting.

“For a long time I wanted a cellphone or at least an iPad because all the kids in my class had at least one,” said Alyssa Menchaca, age 14.

“They always talked through Kik, a texting app, but when I finally got one on my birthday I started getting random messages from one girl who kept saying mean things.”

Another concern with cellphones and tablets is children engaging in sexual nature via text messages and social media.

According to a study by the National Campaign to Prevent Teen and Unplanned Pregnancy, in 2008, 39 percent of teenagers have admitted to receiving and sending text messages of a sexual nature, such as nude or semi-nude photos, lewd messages and provocative videos.

” …Even though I got a phone at age 13, my parents had many restrictions and I resented them so much for not allowing me to have privacy,” said Amanda Napoli.

“But it saved me from a lot of dumb mistakes and now I understand the reason behind their madness.” continued Napoli.

A survey conducted by Ms. Weinberger, author of “The Boogeyman Exists: And He’s in Your Child’s Back Pocket,” said that after surveying 70,000 children, on average, sexting began in the fifth grade, pornography consumption began when children turned eight and pornography addiction began around age 11.

Although smartphones and tablets undoubtedly bring benefits, they also bring destruction for children since many of them are still developing their prefrontal cortex, a part of the brain that controls impulses.

Parents no matter the age they decide to give their child a phone should manage supervision and restrictions.

In order to help monitor the child’s text and application downloads, the guardian can use either Apple’s parental controls or Androids app Qustodio.

“As a parent, our nature is to protect our kids and now it’s not just the outside world we should solely be concerned about,” said Nicole Moore, mother of four.

“Keeping our children safe is a priority and although they won’t like it then, someday they’ll learn it was in their best interest.” 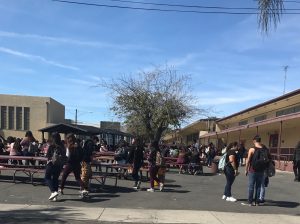