“Rowdy” Ronda Rousey, born in Riverside, California, has established herself not as just the best female mixed martial arts (MMA) fighter in the world, but as one of the best MMA fighters pound-for-pound.

Rousey’s last fight was at UFC 184 on Feb. 28 against Cat Zingano. Rousey won with an unorthodox armbar in 14 seconds, setting a new UFC (Ultimate Fighting Championship) record for the fastest finish in a title fight.

Zingano was expected to be Rousey’s toughest opponent to date, and rightfully so. Before meeting Rousey, Zingano was undefeated and had finished eight of her nine professional fights.

Zingano had developed a reputation for unusual mental toughness highlighted by her multiple comeback victories and her issues outside of the cage; she suffered a knee injury prior to her first title shot against Rousey in 2013, which kept her out of competition for a year and a half and her husband committed suicide in early 2014.

Despite the setbacks and trauma, she made her return in late 2014 with an exciting comeback victory that set up the fight with Rousey.

All the factors involved make Rousey’s record-setting victory against Zingano even more impressive, as impressive as it already is at face-value.

Rousey’s 14-second submission over Zingano was preceded by a 16-second knockout over Alexis Davis in July 2014. In fact, Rousey’s last three fights have only lasted 96 seconds, combined. 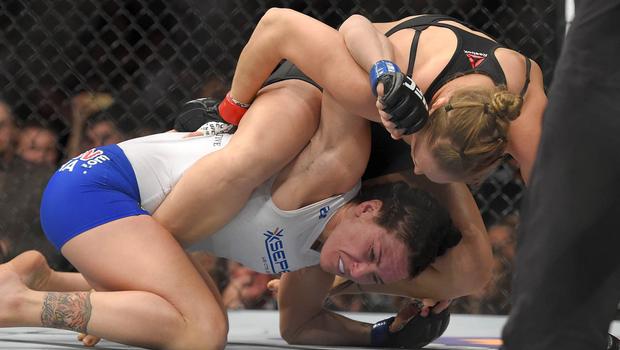 As of March 5, Rousey is ranked number seven in the UFC’s official pound-for-pound ranking. Given her dominance in the UFC, I think one could easily make an argument for Rousey being in the top five, maybe even top three.

Based on the UFC’s official rankings, Rousey has already defeated the current top five fighters in her respective division. She has essentially cleaned out her division, though there are a few up-and-comers that are showing potential to be top fighters in the division within the coming year or two. 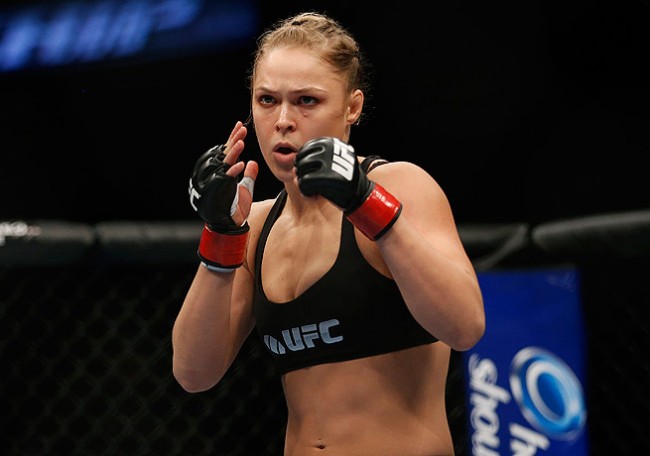 With each passing fight it seems more unlikely that anyone can defeat Rousey. Her dominance, and especially the nature of it, as witnessed in her most recent fights, is a rarity in MMA regardless of gender.

The only fighter that is perceived to have a chance against Rousey is Cristiane “Cyborg” Justino. It’s a fight that has been desired for years, but multiple problems have prevented it.

Justino fights at featherweight (145 pounds) and Rousey fights at bantamweight (135 pounds). Justino isn’t even signed by the UFC because there isn’t a featherweight division for females in the organization as of yet.

Instead, Justino fights in Invicta Fighting Championships where she is the featherweight champion, but Justino has insisted she wants to drop to 135 pounds in hopes of getting signed by the UFC and setting up the biggest women’s MMA fight to date.

Only one opponent—Miesha Tate—has taken Rousey out on the first round. Even she was eventually finished early in the third round of their rematch, after their first fight ended in the first round.

In all her fights, there is perhaps only one instance where Rousey was in danger of losing—Liz Carmouche had Rousey in a neck-crank submission before Rousey would go on to submit her later in the first round in both of their respective UFC debuts.

Rousey is undefeated in MMA; she had three amateur fights, which were under two minutes combined, and she has won all 11 of her professional fights.

At the rate she is going, I don’t find it unreasonable to think that Rousey may be the first dominant MMA fighter to go their whole career without losing.