The gas light on the dashboard of the car turned a bright yellow. Alan Rodriguez was low on fuel but he dreaded going to the gas station.

According to the American Automobile Association (AAA), a member organization for drivers known by most for its roadside assistance, the average gas price in the United States 80 years ago was as low as 17 cents per gallon. Today, the average is over 2 and a half dollars.

In the Inland Empire, however, the highest price for a regular gallon of gas is almost 70% more than the national average.

As Rodriguez pulled up to the local Circle K, only a block from his house, his gaze landed on the bright signage, reading a whopping 3 dollars and 85 cents on the gallon.

Rodriguez, who works a part-time job at the local movie theater, wasn’t fond of spending his paycheck on gas but realizes there is no other way.

“It really adds up, especially when you have other bills to pay,” Rodriguez said. “But you know how it is, there’s not much I can do about it. Everyone needs gas.”

While the jump from 17 cents to 2 and a half dollars is on par with the normal rate of inflation, it’s no joke that a 21-year-old who still lives with his parents has trouble paying for gas.

“My friend says he goes to Sams Club,” Rodriguez said. “He claims it can get as low as like 2 dollars over there.”

Membership only retail chains like Sams Club or Costco share the most competitive prices in the area. Their prices can generally be seen in line with the national average, but almost never go within 20 cents of the highest price scene in the IE.

“I was driving down University and my jaw hit the floor,” Rodriguez said. “4 dollars is insane.”

Kazim Konyar, a Professor Emeritus of economics at CSUSB, gave insight into the varying prices of gas in different areas.

“Gas prices are mostly set by market forces,” Konyar said. “So the regional price differentials are due to supply demand dynamics in the respective regions.”

In comparison, Texas is listed by AAA with an average of 2 dollars and 30 cents per gallon. While this is considerably lower than California, it is also worth noting that the minimum wage in Texas is almost 5 dollars less than that of California. According to the National Conference of State Legislatures, Texas minimum wage stands at $7.25 an hour.

“Minimum wages are set as a result of legislative actions at the federal, state, and municipal levels,” Konyar said. “So the differences in the political, economic, and social conditions at those levels are likely to explain the variations in the minimum wages.”

“It makes a lot of sense when you put it that way,” Rodriguez said. “With tuition so high and bills to pay, gas is just another headache.”

AAA lists California as the highest average in the country, outpacing the runner-up by over 40 cents.

Despite this, there are a few things students can pay attention to in order to get the most bang for their buck. And it starts with the choice of vehicle.

While students might have the option to choose between an older, less expensive car, it may make more sense in the long run to get a newer, more expensive model that will get better gas mileage.

Another option is to download apps such as GasBuddy and Gas Guru. Users who drive around the city log the latest price of gas at any given local station. This can help students find a location that charges a price they are comfortable spending.

Students can also opt to pay with cash instead of card as many gas stations will charge a fee when paying with card. If that isn’t an option, depending on one’s bank’s policies on credit cards, rewards for spending money on gas may be available.

“Not much we can do out here,” Alan Rodriguez said. “It sucks, but what am I gonna do? Walk on the side of the freeway to get to work?” 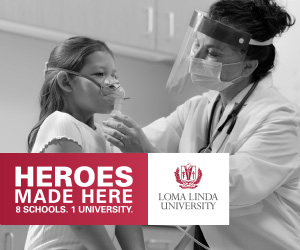 CSUSB's transition to the semester system in the midst of a pandemic has brought upon mixed feelings. As the fall semester comes to an end, a professor and a few students share how they endured the … END_OF_DOCUMENT_TOKEN_TO_BE_REPLACED

Some students at CSUSB are new to online schooling and therefore still adapting to this difficult transition. How can we make the most of it, you may ask? Think about it this way: if you have made it this far … END_OF_DOCUMENT_TOKEN_TO_BE_REPLACED