California natives are hungry for a World Series after the Los Angeles Dodgers lost the World Series to the Houston Astros in the 2017 season.

The Los Angeles Dodgers brought LA to their feet when they made it to the World Series by defeating the Houston Astros. The golden state is hungry to get a World Series back to LA, with these two Southern California teams hoping to make to the big show.

As the ball is back in play, the Dodgers have started their season with injuries in spring training, losing their third baseman Justin Turner when a pitch hit his hand. Corey Seager ,short stop is out for the season he will undergo Tommy John surgery.

The Dodgers placed Rich Hill  and Hyun-Jin Ryu on the disabled list and recalled Adam Liberatore. Rich Hill has been in and out of the DL list. Dodgers top prospect made his MLB debut right hand pitcher Walker Buehler did not have a day off.

Bullpen usage thus far has been greater since the Dodgers have played over three games going past the 10 innings.

Yasmini Grandal and Austin Barnes are the Dodgers catchers.

Dodger fans are excited. CSUSB student Adam Villas, 22, talks about the Dodgers slow start “getting the slump over with early in the season.” 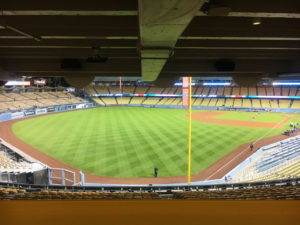 The Angles are ready with Shohei Ohtani on the mound and in the batter box.  In his MLB debut he did not disappoint pitching six innings and allowing only three runs.

Ohtani is allowing Anaheim Angels  to light up that Halo being a designated hitter (DH) three times a week.

The Angles have won over 10 games leaving their losses to be under five.

Matt Shoemaker No.52  right hand pitcher is on the DL with forearm strain which will add to the Angels pitching depth.

Catching for the halos  M. Maldonado and R. Rivera.

Mike Trout No. 27 has 4 homers and continues to be a key to the Angels success alongside Albert Pujols. Trout has two home runs and over five RBIs.

The Angles have witnessed good baseball since the season began and continue to put on a Sho as the games come along.

In the beachfront of California at Petco Park the San Diego Padres are in the rebuilding stage they have won over 10 games and losing over 15.

The Padres accquired first basemen Eric Hosmer in hopes to continue to build a stronger franchise. SD has yet to win a World Series but has won two NL pennants.

The Dodgers and Padres will play a series in Monterrey, Mexico starting May 4th-6th

Southern Californians, have a lot of baseball ahead of them with the Dodgers seeking to go to the World Series again, the Angels lighting up the halo and SD hoping to add to their ever growing roster. These SoCal  have the golden state rising to their feet again

Founded in San Bernardino in the middle of the COVID-19 pandemic, The Hayds is an American rock band who draws some of their inspiration from their Mexican roots. Josh Muñoz, the band’s lead singer, lead … END_OF_DOCUMENT_TOKEN_TO_BE_REPLACED

Richie Chor, a small business owner of Lily Popp Café in Anaheim Hills, CA, discusses the ups and downs of opening a business during a pandemic and how he finally got his dream business approved. Lily Popp … END_OF_DOCUMENT_TOKEN_TO_BE_REPLACED