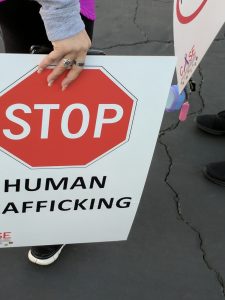 The Inland Empire has connected with Coalition Against Sexual Exploitation (CASE) to promote more awareness about Human Sex Trafficking in San Bernardino County.

As these events grow, so does the awareness of sex trafficking in the Inland Empire.

“The first CASE walk started in 2011 that had about 75 people, and now it has grown to two short of a thousand people,” said CASE Coordinator Anne-Michelle Ellis.

The people who attend the event are there to help support and raise awareness about human sex trafficking.

“The goal for these walks is to help raise awareness about human trafficking and to help the men and women that are stuck in the life,” said Grace, an event supporter.

Over the years the Inland Empire has grown into a larger location for sex trafficking.

“The inland Empire is considered a hot spot for sex trafficking. Since there is lot of freeways around here, that gives a lot of opportunities for victims to get picked up and dropped off around the Inland Empire,” said Gabby, an event supporter.

“The average age children are sex trafficked is starting at the age of 12 and 13 all the way up to twenty or older,” said Ellis.

As the demand for human sex trafficking grows, so does support and help. 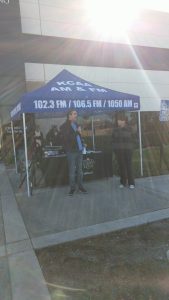 “In San Bernardino county alone CASE has worked with and helped about 150 young people over the last six years that are from ages 13 to 19 years old they are all american citizens and are all survivors of human trafficking,” said Ellis.

“It does not get easier. Everyday is going to be harder then the last but with people like Emily (supporter for sex trafficked victims) you can get through it one day at a time,” said Rashaney, a human sex trafficking survivor.

Sex trafficked victims are stripped of their agency.

“Men and women are sold to someone for sex trafficking and everyday they are working to pay off the money that was spent on you. So it’s not like men and women want to be in this life they are forced into it,” explained Dr. Julie Taylor, professor of Communication Studies.

Victims that are sold in the human sex trafficking industry do not have to be a specific age, gender, or type.

Victims in the sex trafficking industry are tricked into this life by people they trust.

During the CASE event, Rashaney shared part of her story to encourage the people being trafficked that they are not alone.

“The boy that I met seen that I was broken inside and seen that I was a troubled kid and he used that against me. As much as he told me he loved me and he cared for me, he didn’t he was just using me. The hardest part was seeing past that and seeing that if he really did love me he wouldn’t make me do these things,” said Rashaney.

According to Taylor, people often do not know that they are being trafficked and might event see their trafficker as their significant others.