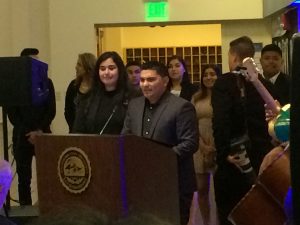 The LatinX Center celebrated their grand opening in SU-202, where several speakers and attendees gathered.

Speakers included those from student committees to faculty members that had worked on making the center possible, including President Tomás D. Morales.

Michael Mejia, a graduate student assistant, stated that the center was created by students, for students. The center wants to provide an area where Latinos, Latinas, LatinX students, and supporters can find resources such as mentoring, guidance, and tutoring.

“We don’t want it to be a hangout spot, we wanted to have actual services provided in the center,” said Mejia.

According to Mejia, the center happened because of the students, and it was constructed with their opinions and support in mind.

President Morales stated that in the past two decades, the proportion of Hispanic students has steadily increased.

For many, a center like this has been long overdue.

”We have a place where individuals can come and find an environment that is accepting, promote an open exchange of ideas and where a student can come and feel comfortable,” said Morales.

Morales stated that current location for the center will be, for now, a holding spot until the Student Union expands.

He foresees the center becoming a bigger entity in the near future for the CSUSB community.

The center appealed to a lot of students, with one student in particular saying that, “the LatinX Center sounds like a very welcoming place, a place where I wouldn’t even feel too intimidated to approach.” 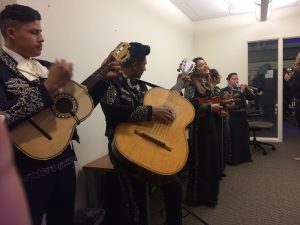 “I had heard the mariachi music from the lower floor, it really grabbed my attention. When I found out more about the grand opening I wish I had known about this sooner,” said student John Alvarez.

“Coming to this school for my first year, I have noticed that this school is really cultural and it really feels welcoming that the Student Union is having more resources to use from,” continued Alvarez.

The LatinX Center is meant to be a place in CSUSB where Latinos, Latinas, LatinX students, their allies and supporters can congregate, exchange ideas and support one another, according to Brian Haynes, Vice President of Student Affairs.

Haynes claimed that he also believed that the center has been long overdue.

Diana Hernandez, the Student Union Board of Directors Chair, is extremely proud of the center’s establishment.

“When I was growing, my school system didn’t teach me anything about culture,” said Hernandez.

“This center will also reach beyond our campus, directly into the heart of the greater community,” said Morales.

Following the ribbon cutting ceremony, a tour of the facility followed, along with the continuation of mariachi music.

The LatinX Center is looking to have an impact in the community, not only to students, but for everyone.