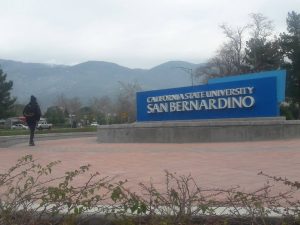 Trump has promised to deport all 11 million undocumented immigrants currently living in the U.S, specifically those with criminal backgrounds.

“These policies are taking away people that do not have a criminal background,” said Karina Abraham.

According to Abraham, false reports of immigration checkpoints published via social media is provoking fear among the Latino community.

“I am afraid of what can happen to those I love,” stated Maria Barragan-Arreguin, coordinator of the Dreamers Resource and Success Center. “I know that these kinds of operations have happened throughout time, but now, media has been giving them a spotlight to scare our communities.”

Families are living in fear of being deported and separated from loved ones.

Permanent residents fear that they will not be allowed to re-enter the United States if they travel to see their relatives due to Trump’s policies also targeting green cards holders.

In accordance with the Deferred Action for Childhood Arrivals (DACA) program, lawmakers state that these recipients are not at risk of deportation. However, they must follow certain conditions.

President Trump in his televised comment to FOX New  mentioned that he will “deal with DACA with heart.”

He also said that some DACA recipients are gang members and drug dealers but “some are incredible kids.”
Trump’s executive order only applies to non-U.S. citizens, therefore anyone with a U.S. citizenship whether that person in natural-born or naturalized, will not be affected directly, according to The Atlantic.

Regardless, the recent increase in raids have been evidence of Trump’s promise.

“The use of deportation forces is greatly unfair; the negative effects of this enforcement would deeply penetrate the families, homes and communities where immigrants live,” stated Enrique Murillo, professor of education and executive director of the Latino Education and Advocacy Days (LEAD) Summit.

“I worry every time my husband leaves for work because I am afraid that he might get detained in a raid,” said Aurora Munguia, mother of four children.

After deportation, some children may be placed in foster care or taken by their parents depending on their situation.

“Imagine the fear of a child that they will be placed in foster care, return home from school to empty house after parents were removed; children also became fearful when they see any law enforcement vehicles,” said Murillo, who worries about her children.
In San Bernardino, there has been a decrease in service utilization such as using health care services.
Some are afraid to share personal information at certain places, believing that they could possibly be deported.

“It’s affecting them negatively to the point that they are in fear to go out and do things that normal Americans would do and it’s a very sad perspective,” said student Abraham Monje.