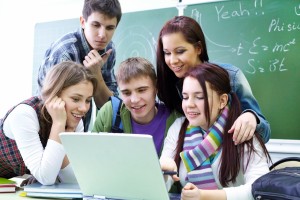 Knowledge is easily attainable in the 21st century, all thanks to the Internet.

You can go from instantaneously looking up a scholarly source to following a vegan lasagna recipe.

You can research so much information within the Internet, allowing you to obtain “mindless” knowledge. But that doesn’t change the fact that the Internet has failed to change social status.

It has not affected social mobility and has kept a divide between the future of rich and poor kids within the United States as written in the article, “Rich kids use the Internet to get ahead, and poor kids use it ‘mindlessly,’” available on marketwatch.com.

Robert Putnam, political scientist and Malkin Professor of Public Policy at Harvard University, explored this separation of advances in technology within his new book, “Our Kids: The American Dream in Crisis.”

“It has not leveled the playing field at all in terms of the difference between rich kids and poor kids,” stated Putnam.

Putnam does not fail to mention it is not the Internet’s fault for this, nor is it the kids who are using technology.

The usage of technology may vary from one social class to another.

Young people within an upper-class status tend to use the Internet for educational, political, health, and more ‘rewarding’ causes, according to Putnam.

Putnam said that those in a lower socioeconomic class tend to use technology advances for entertainment and recreational purposes. However, Putnam is not saying wealthier children are completely focusing their

It is inevitable that there are interactions through social networking with Instagram, Skype, and even Snapchat.

Although, there is a reflection shown on social networks in real life, meaning wealthier kids can bring in more of an audience to help them further their career paths.

“Just because teens can get access to a technology that can connect them to anyone anywhere does not mean that they have equal access to knowledge and opportunity,” stated Putnam.

“You lie down with dogs, you get up with fleas. I don’t think the Internet has anything to do with social mobility,” said student Forrest Guthrie

“I believe it comes down to how your guardians raise you. If they raise you to succeed and push you in the right direction,” added Guthrie.

“I agree that being wealthier gives others the advantage because they can network more with their families and friends. So I can see how social status is at a stand still. But it really comes down to the motivation a kid or person has to change this issue,” said Steven Silva.

Personally, I feel it is about who you know, not what you know.

Money talks and may potentially surround you with a crowd you might not want to attract, yet, it may get you farther than knowledge alone.

I also agree it comes down to how determined a person is to change their social status, because even if you know all there is to know of a subject or field, but have no connections in order to further your career path, you may still be unsuccessful.