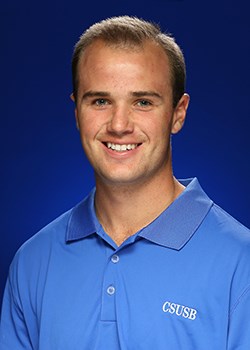 Jake Meloche, is a duel-sport athlete at CSUSB playing baseball and golf.

A Michigan native, Meloche later moved to Coronado, California where his passion for both sports blossomed.

Meloche played four years of baseball at Coronado high school, and played on the golf team his senior year.

A business major in the classroom, Meloche is taking care of nothing but business on the baseball mound and the golf course.

A pitcher for Coyote baseball, Meloche injured his elbow and will not be able to pitch this season.

A Coyote athlete nonetheless, Meloche decided to give a shot at the Division II level.

“I am blessed to be able to play the two sports that mean the most to me, and grateful that both Coach Parnell and coach Mainez all meet to compete, represent the school and community in both ways,” said Meloche.

“Meloche came out pretty seasoned for his first event. He maintained his and was competitive. His ability to to focus as a pitcher is definitely seen in his golf. He is a great asset to the team,” said Coach Mainez

Meloche did not disappoint; he finished second best on the team, finishing T13 alongside  fellow Coyote Justin “Smooth” Sandoval. 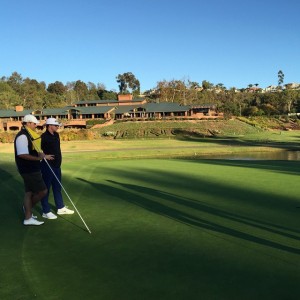 Meloche hadn’t played competitive golf since his senior year at Coronado high school where he excelled receiving the Most Valuable Player award and finished first team all league in the City Conference during his only year of golf.

“I had a blast playing in the Coyote Classic. Coach Mainez and the staff put on a great event. I was a little nervous because it was my first tournament in three years, but it was good to get my feet wet.”

Meloche is a a phenomally talented athlete but has aspirations far beyond the mound and golf course.
“After college I will be following my fathers footsteps in becoming a naval aviator,” said Meloche.

Food: “I’m simple anything from a cow or chicken, but Steak and Potatoes to be specific.”