The PAWS and Chill event was held on May 28 from 10 a.m. to 2 p.m. at Wilson Park located near the Recreation Center. PAWS stands for “Pet Away Worries and Stress”. The event offered a variety of free activities to give students the chance to de-stress before upcoming finals. 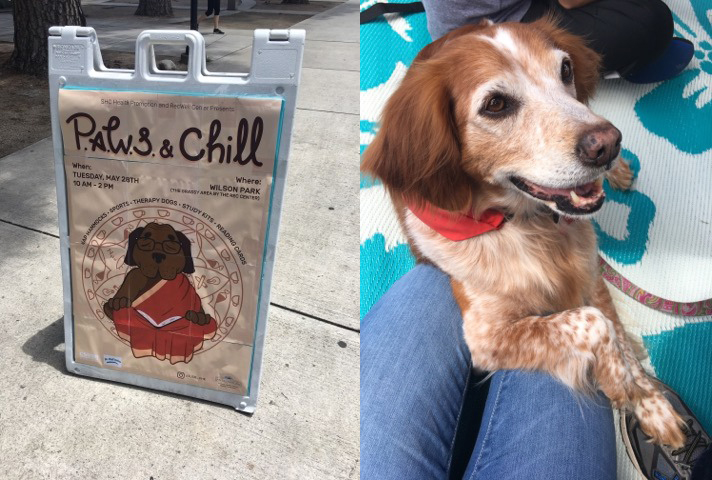 These activities included a booth of stickers with sayings such as, “Believe in yourself and you will be unstoppable,” which outputs motivation. Other stickers included pictures of succulents with captions using puns such as, “Succulents are plantastic” and “I am a succa for you”.

A second booth offered temporary tattoos. Students had the opportunity to pick out what tattoos they wanted and used water to apply them. There was a large variety of tattoos ranging from clever sayings such as, “Ohana” and “You are the one” to other little designs such as flowers, stars, animals, arrows and other symbols.

A third booth offered students the chance to use color therapy. Colored pencils were provided along with therapeutic coloring and doodling pages.

A fourth booth gave students the chance to have their tarot cards read to see a storybook of their lives.

Along with the activity booths were hammocks, which gave students the chance to lay down or swing. This helped students to relax and feel worry free for the time being.

The main activity of the event was the chance to visit with registered therapy dogs. Cards with each dogs photo, name and short personality description were given out to those who sat for a visit. Before the cards were given out, the dogs were told to “autograph” the cards to which they responded to by hitting the cards with their paws. The dogs there included Shilo, a Bichon Frise/Poodle, Savannah, a French Brittany and Olive, a Chihuahua.

Participants were encouraged to fill out a survey that indicated their stress levels before the event and then their stress levels after the event. Once turning in this survey, they were offered a goody bag that included snacks, such as a granola bar, a list of studying to-do’s and don’ts and bubble wrap with a note that says, “Whenever you are stressed and full of troubles, just grab your sheet and pop some bubbles”.