After four years of planning and two years of construction, CSUSB’s newest building is open and available for use. Students are already eating, studying, and socializing in the building’s large shaded plaza.

The building contains 24 classrooms with the newest state-of-the-art technologies. Many of these classrooms are supplied with interconnected smart boards, smart screens, and smart carts, giving the professor more ease and control.

The larger lecture halls come with pre-installed “catch boxes” which are Bluetooth operated microphones designed to be passed around a classroom, giving more ability for group discussion. 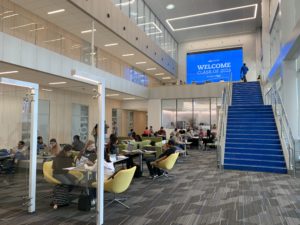 The Center is the new home for the College of Extended and Global Education, which handles the affairs of international students through various programs, and the Professional and Continuing Education courses.

“I don’t know what goes on in there, but I know it’s cool,” said student Diego Garibay, who was impressed with the size and features of the new building. “It’s an amazing use of student money. They should do stuff like this more often.”

The new building is owned by the College of Extended Learning and Education (CEGE). Its cost, $55 million, was funded by CEGE, which is a self-supported entity, not funded by the Cal State system.

Garibay was surprised to hear the size of the building cost, expecting it to be a near $300 million price tag. “$55 million is not bad,” commented Garibay.

Others shared Garibay’s surprise but not in the same fashion. When told about the $55 million price tag, senior social work student, Kassandra Serna said, “That’s insane.”

Although the new CGI building is not funded by the student fees or other CSUSB funds and had nothing to do with the tuition increase in 2017-2018, Serna expressed dissatisfaction with the university.

“It would have been nice to have some sort of student input,” said Serna. “I’m not using the classrooms, so it really isn’t benefitting me at all,” said Serna.

Valentino Fernandez, a senior computer science major, agrees with Serna’s sentiment. “When tuition got increased I wish I could have had some kind of vote for what that money would go to,” said Fernandez.

Fernandez added, “I would’ve voted for more parking. I’m not upset that the money didn’t go to parking, I just wish I had a say. I know that a lot of foreign exchange students are gonna be benefitted, but personally, for me, the building is kind of useless.”

Despite the conflicting feelings of the student body, there seems to be no hesitation in students getting the full use of the external features of the new building. Other resources include a reflection room for prayer and meditation, an event balcony, and the ability to rent out one of the 14 rooms simply by talking to the concierge at the center’s front desk on the first floor.

Students have already started to enjoy the three stories of furnished study space and market at the Center for Global Innovation, and are happily welcoming the new building as a part of the campus.