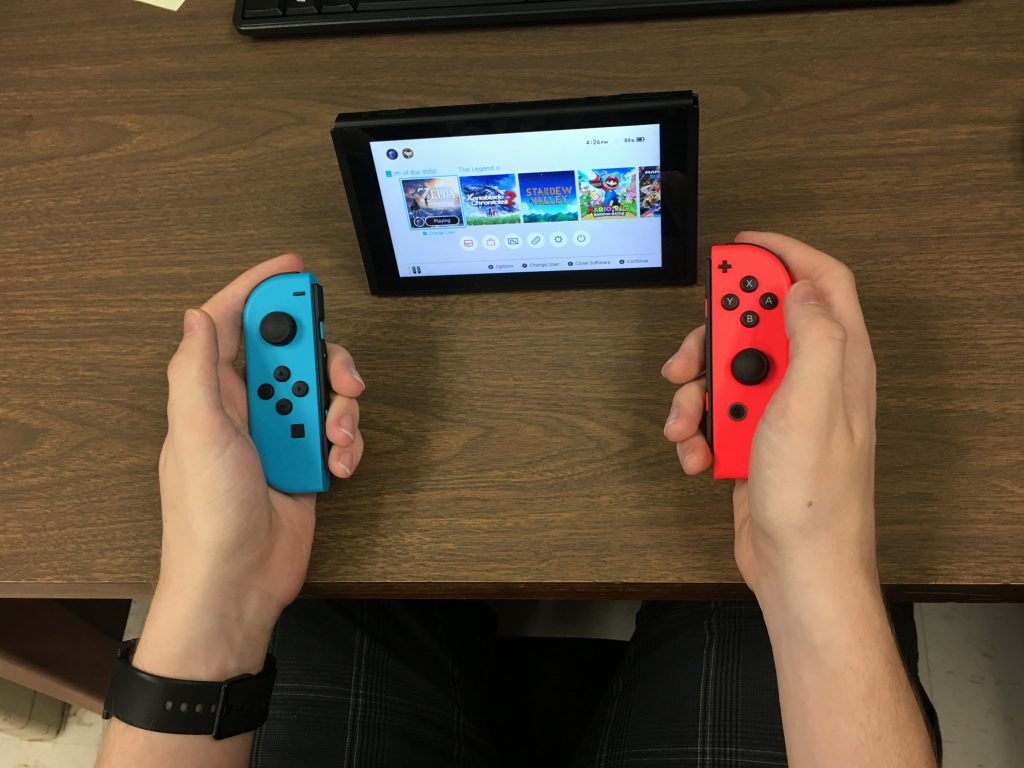 The Switch, released in March 2017, is Nintendo’s latest offering to the gaming world. The device is a handheld tablet that can also be docked to displayed on a monitor or TV.

Nintendo has continued their tradition of creative controllers. This time, there are three main ways of using the “joy cons:” attached to either side of the tablet, detached with one in each hand, or docked into a provided piece that allows them to be held like a more mainstream controller.

From a hardware perspective, the Switch is not as powerful as its competition this generation. It’s not even close, but this is for good reason. Due to it also being a handheld, if it were built with hardware meant to run games in 4K, it would be massive and have poor battery life.

The joy cons are like a downsized Wiimote on steroids. They give haptic feedback, the likes of which nothing else competes with, making it so that a developer can simulate the feeling of marbles rolling down the inside of the controller. The remotes also have an impressive battery life and charge by being attached the main device, rather than needing batteries.

Games for the Nintendo Switch have also been an improvement over the selection for the Wii U, the Switch’s disappointing predecessor. Agustin Castro, a former student, said “after the less than impressive selection of games released during the Wii U’s short-lived lifespan, it’s refreshing to see Nintendo doing something right.”

For example, “Mario Odyssey” was a massive hit and was at the top of many lists of the top games of 2017. Titles such as “Legend of Zelda: Breath of the Wild“ and “Xenoblade Chronicles 2“ have also been driving sales and making it so that many months after the initial launch, the Switch is selling out faster than it can be stocked.

The Nintendo eShop returns as the marketplace to purchase digital copies of games. Unfortunately, the Switch only has 32gb of storage, which games can fill quite easily. Thankfully, a micro SD card can be used to hold extra data.

Some final points of note for the Switch are its charging method and battery life. Nintendo decided to use USB type C, rather than their previous proprietary chargers. This means that it can be charged with the same cable one would use for their new Android phone or Macbook Pro, if it is one of the 2017 models. A portable battery pack that has USB-C output can also be used to extend the life during a flight or car ride.

Battery life does depend upon how intense of a game is being played. For example, “Xenoblade Chronicles 2” is incredibly demanding because of it’s massive world and how much is constantly happening, and one can generally get around 3 hours of battery life while playing it. On the other hand, a game like “Stardew Valley” is not nearly as demanding and the battery lasts closer to 6 hours.

The Nintendo Switch is a wonderful device, with a fun lineup of games that can occupy the player for days. It has been a step in the right direction and is doing a great job restoring hardcore gamers’ faith in Nintendo, while also letting them keep the more casual playerbase the original Wii earned them.