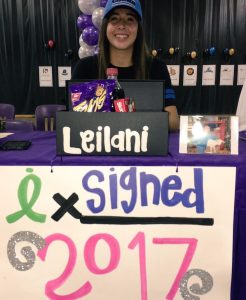 CSUSB’s volleyball and soccer programs use National Signing Day to bolster their roster for this upcoming 2017 season with solid recruits.

For volleyball and soccer players, National Signing Day started on Feb. 1. Social media was spammed with images of excited athletes holding pens to their National Letters of Intent (NIL), announcing where they intend to play for the next few years.

The NIL is a document signed by a prospective student-athlete who plans to attend an institution for the first time in the academic year after they sign.

Signing an NLI is a big deal because once a recruit signs, they must attend the school they have signed with in order to receive financial aid. The National Collegiate Athletic Association (NCAA) rules forbid other coaches from recruiting them.

The NCAA has these restrictions in place to verify the recruiting process. An NLI ensures players that they will receive aid and it allows coaches to be certain that a recruit will attend their school.

For coaches, there is a lot of leg work that goes into gathering solid recruits in preparation for signing day.

“This time of year is important recruiting wise because we’re forging relationships to get commitments for incoming players after next season (juniors in high school or freshmen in junior college),” said LeBaron Hollimon, Head Coach of women’s soccer.

“We typically have all of our recruiting complete for the upcoming season by this time of year,” contiuned Hollimon.

Hollimon has managed to recruit a total of eight athletes thus far. Of the eight recruits, seven of them are incoming freshmen. The freshmen recruits are: Jolie Lopez from Covina, Vanessa Gonzalez from La Mirada, Sarah Savella from Chino Hills, Jessica Martinez from Ontario, Maria Gallardo from Hemet, D’Sanye’ Nugent from Victorville and Leilani Ramirez from Rialto.

“I’m pretty excited for this upcoming season considering it’s my last two years and I’ll be playing with some of my former teammates from Taft,” said Benevidez, a Porterville native and incoming goalkeeper for the Coyotes.

“And I’m excited to earn a spot on the team, that way I can help the team out with my part in goal,” Benevidez added.

In total, women’s soccer is bringing in three forwards, three mid-fielders, one defender and one goalkeeper.

“We have worked very hard to first, bring in players who embody the character traits necessary for them to be a positive member of our culture. Second, the players we are bringing in have the technical abilities and high soccer IQ to help us achieve the high standard of play I expect,” said Hollimon.

“We have added quality to the quality we already have and we will compete very hard every game and should give ourselves a great opportunity to improve upon last year’s success,” Hollimon added.

As for men’s soccer, they are still in a state of limbo regarding who the permanent head coach will be for men’s soccer. For this reason, they have not yet committed any prospects for 2017. However, they have verbal commitments from eight prospects.

“We are confident this incoming class may be one of the strongest we have had in years for the CSUSB Men’s soccer program,” said interim head coach for men’s soccer, Darren Leslie.

Alexia Cardoza is an outside hitter from Chino Hills high school who has committed to CSUSB.

“We are all very excited for both of these players to get into the gym with us and make an immediate impact to this program,” said Lauren Nicholson, junior outside hitter for the Coyotes.

With so many new recruits, the upcoming soccer and volleyball seasons should be exciting to watch.