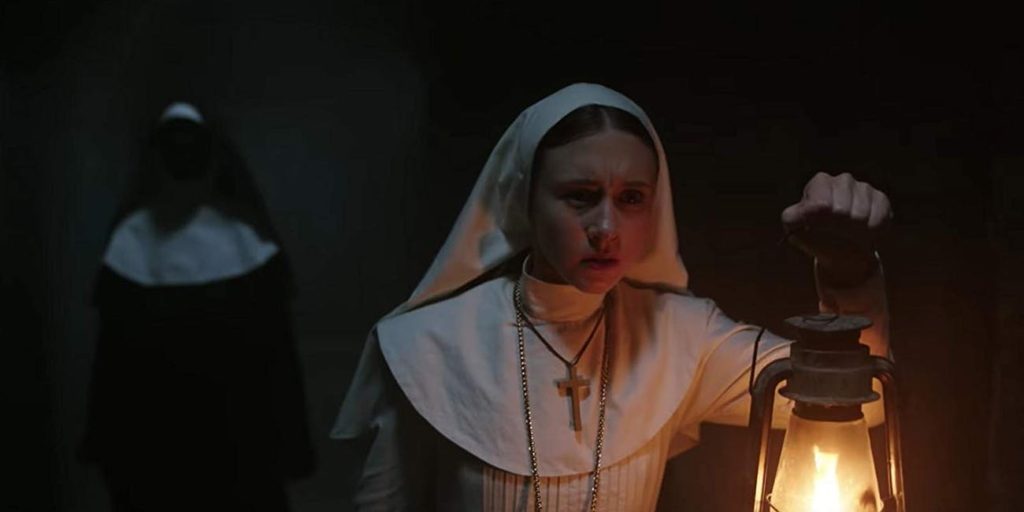 “The Nun,” a horror film released on September 7, is the most recent addition to what has been called The Conjuring Universe from Warner Bros. Pictures and New Line Cinema.

The film is set in 1952 Romania and focuses on Father Burke, a hardened Catholic priest, portrayed by Demian Bichir; Sister Irene, a nun who has yet to take her vows, played by Taissa Farmiga; and a villager named Fenchie (Jonas Bloquet) who travel together to an abbey to investigate the apparent suicide of a young nun.

Unknown to the pair, a demon which disguises itself as a nun is haunting the abbey and terrorizing any that enter, leading to a battle of faith and survival.

“The Nun” is directed by Corin Hardy who previously worked on another horror film called “The Hallow,” and he carries over plenty of style into this production. The sets are lavish, the camerawork is dynamic and the actors deliver strong performances.

The film feels like a callback to a more classical era of filmmaking in the horror genre. It borrows elements from the classic Universal Monsters of the ’30s and ’40s to the output from Hammer Film Productions from the ’50s to the ’70s.

This is further cemented by cinematographer Maxime Alexandre’s use of color and silhouettes. There are wonderful moments where a dominating red takes over the screen that helps to build up the scares.

Demian Bichir delivers a surprisingly complex performance as Father Burke, a priest haunted by a failed exorcism. Taissa Farmiga’s Sister Irene serves as an exceptional counter to Burke, a nun who is still learning her own faith and is seemingly unprepared for the horrors ahead of her.

Jonas Bloquet’s Frenchie will undoubtedly be a favorite among audiences as his quick wit and humor provide a much needed breath in the film’s darker moments.

The strong character work is all the more surprising given the film’s quick pace inside a swift 96-minute runtime.

The trio form the backbone of the story while the title character of the Nun, or more appropriately Valak, feels like a hidden threat whose physical presence isn’t truly felt until the climactic third act, as the demon uses trickery and even the undead to terrorize our heroes.

This may turn off those wanting to see a film all about an evil demon nun chasing people for an hour and a half but it provides some much needed freshness to a series so focused on demonic entities.

Even in the quick runtime, Hardy made sure the film embraces its atmosphere and setting from the creepily empty monastery to the fog covered cemetery below.

The film at points relies too much on jump scares (an abrupt visual change usually accompanied by a loud noise) that can overshadow the slowly developed dread that surrounds the film. This thankfully doesn’t hinder the overall experience and uncomfortability the film delivers.

“The Nun” isn’t a film that can really be classified as terrifying but it’s a fun experience for any fan of the genre and will likely be even more appreciated by fans of the Conjuring films.

Considering the film’s stellar performance at the box office, beating out all other films from its own franchise, don’t be surprised to hear about “The Nun 2” in the near future.

Until then, I’ll be praying we see more of Father Burke and Sister Irene in the future.