The Coyote men’s basketball team faced a loss with a score of 92-87 against the Humboldt State Lumberjacks in the first round of the California Collegiate Athletic Association (CCAA) tournament hosted on March 5, 2015.

The number six seeded Coyotes and the number three seeded Lumberjacks ended the game tied at 74 points leading them into overtime.

“Going into the game we had mixed emotions, but we knew we were going to leave it all on the court and hope the outcome be in our favor,” said freshman player Brian Gugliotta.

The Coyotes defeated the Lumberjacks twice this season, with the first game ending 77-70, and the second game ending 82-71.

The Coyotes led the board in free throws and three-pointers but the Lumberjacks led in field goals.

The Lumberjacks capitalized on their rebounds and second chance points, whereas the Coyotes did not.

Senior Taylor Statham led all scorers with eight points at the end of the first half.

The Coyotes started the second half with the ball, but just five seconds later turned it over. 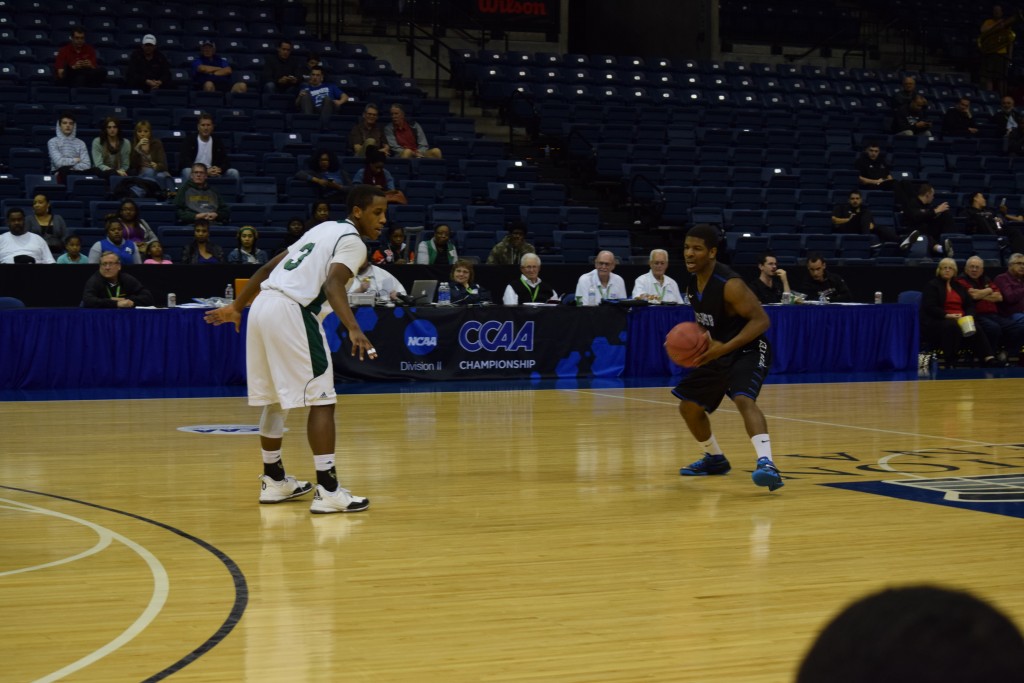 Partially through the second half, the Coyotes still trailed the Lumberjacks by three points, substantially cutting the deficit.

With six minutes left in the game, the Coyotes took the lead 64-62 and held the lead until just seconds before the end of regulation time, when the Lumberjacks tied the score 74 all.

At the end of the second half, the Coyotes outscored the Lumberjacks 42-33 during that half but still had to face overtime.

The Coyotes held the board in field goals and three pointers, but the Lumberjacks out shot the Coyotes on free throws.

In the beginning of the five-minute overtime period, the Lumberjacks possessed the ball, and just 12 seconds in took the lead with a free throw shot by Calvin Young.

Three minutes into overtime, Coyote Tevin Harris made a layup, bringing the score tight at 76-79.

With 17.2 seconds left in overtime, the Coyotes trailed 88-85, just a three point game.

The overtime period ended in a victory for the Lumberjacks, with a score of 92-87.

Senior Isaiah Morton’s dynamic performance in the second half kept the Coyotes in the game, keeping the score tight.

With only six points to his name at half time, Morton ended the game with 23 points, leading all scorers.

“We’re going to play every play like its the last,” said Morton.

Needless to say, for the eight seniors on the team, the game was their last as collegiate athletes.

The Coyotes will not advance to the next round of the tournament, resulting in the end of their season.