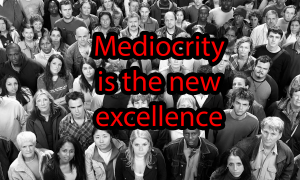 The world we live in, unfortunately, functions under a system where mediocrity is glorified, encouraged, and preserved.

This system thrives because mediocrity permeates all levels of work—despite expectations of superior professionalism and expertise—including the highest ranks of management.

I am not criticizing people whose work, after making a valiant, genuine effort, may still be sub-par. No, these people should receive absolute praise and recognition—because you give a damn, you matter.

I am specifically targeting those who settle for adequacy and vilify, belittle, or ridicule those who exert more effort, spend more time, commit to higher levels of detail, nurture and birth results of a higher pedigree.

The system perpetuates, not creative freethinkers, but obedient drones to perform another’s bidding.

Education is regulated—and funds are mutilated to skeletal levels—so that, ultimately, state tests are all that matter, cutting alternative methods and materials all-together, as well as the arts.

Yet, test scores remain stagnant, even digressed in some respects, at the international level for the United States of America, according to edsource.org.

This school system of assembly-line production where every human must abide to identical regulations and qualifications, but nothing more, persists beyond the public and higher education systems.

It infiltrates work environments of all fields, becoming extremely difficult, and in some cases impossible, to escape institutionalized mediocrity.

The system is successful because it is not always a professional or academic superior who ridicules or takes advantage of those who work with, and for, a greater purpose.

Our very own colleagues willingly participate in the harassment, but perhaps for more selfish reasons.

The persecution of those who dare to go the extra mile may be an indirect effort by some to maintain the status quo and a conscious one by the rest.

In this system, you are either appreciated and rewarded, taken advantage of for your determination and abilities, or terminated before others may acknowledge and reward you.

I know of these three outcomes from experience.

My bilingual nature posed a unique problem for the restaurant: I was extremely versatile and adaptable in the potential tasks I could perform, so how should I be handled?

It eventually became routine for me to perform all the duties of every position but chef—all in the same shift.

If I faltered in my duties, of which not a single other employee was responsible for or was expected to perform, management scolded me for my apparent incompetence.

Was I compensated additionally for my bilingual skill or three-fold responsibilities? Not a single cent more.

I kept working every under-staffed shift with a stupid, forced smile because I was utterly grateful to be employed and management was completely aware.

Upon hiring, a strange thing occurred: Customers, particularly senior citizens, responded well to my courteous and pleasant presence at concessions.

I greeted with a genuine smile, implemented basic manners, and treated the customer like a human being.

So much so, I received an unprecedented average of one or two compliments officially presented to management every week. I believe this had much to do with older customers whom generally appreciate respect and manners, who also happen to be a vital demographic during weekday showings.

Unfortunately, there was also an increase in complaints for other employees who happened to work the same shifts I did.

Instead of requesting the other employees to be more friendly, courteous, or repress rude behavior to customers, management decided it’d be more efficient and more in their favor to let me go while I was technically seasonally employed.

After all, the sheer number of complaints were virtually nonexistent before I was in the picture.

Additionally, a manager who delayed my termination, who fought to keep me on board, confided that the other managers spoke ill falsities of me to expedite my termination because they were intimidated by me and feared I would one day replace them.

In the Coyote Chronicle, my ambitions are evident in my work ethic, exemplary results, and devotion to my writers.

However, rather than acknowledging me as going the extra ten miles, on multiple occasions, I believe peers ignore those very results—and instead of saying absolutely nothing—snidely comment, “you help your writers too much.”

Or upon my intense focus and meticulous detail to my section layouts and what I’m able to create on Photoshop, others have shaken their head in shock or repulsion and said, “you’re crazy, that’s a ridiculous amount of work.”

I simply ignored them because my results speak for itself, or whip out one of a dozen facetious remarks: “Oh, you’re still alive? Congratulations.”

I have been called arrogant and others have said, “he just wants to be right all the time.” The former is purely opinion, and thus subjective, varying in definition from person to person—so, maybe.

The latter is fallacious—and in a moment of pure conjecture on my part—an internalization of something that says more about the speaker than it does about me.

Rather than paying a compliment or acknowledging another’s intelligence or skill set—or keeping their mouth shut—he or she who refers to someone as either the former or latter indirectly expresses intimidation by that person.

He or she cannot—will not—admit to that person being of equal or superior talent, intellect, or creativity, because to do so would imply he or she is not as special in any of those regards.

So, rather than paying the compliment or merely verbally acknowledging this finding to another person, he or she internalizes and reciprocates it in a negative fashion: you are not smart, creative, nor hardworking; you are arrogant or, merely, just always want to be right.

All in an effort to make oneself feel better without actually earning or accomplishing anything.

While the system encourages mediocrity, individuals seem to relish in it because the result in expectations is lowered, as well as the expectations necessary to meet praise. So, minimal to moderate work yields optimal praise.

Many of us feed on praise but hate work.

People have egos. I am no different. It’s just as Hannah Montana said: “Nobody’s perfect.”

I try not to let my ego dictate my thoughts and actions.

I recently came across a quote from Frida Kahlo of which I have always felt true but never eloquently formed in thoughts or words: “Treat your servants like family and your students like esteemed colleagues.”

Essentially, love and respect everyone because you are no better than the person next to you, and perhaps just as importantly, share and learn from those around you because life is a continuous opportunity to engage in lessons and gain wisdom.

You don’t condemn others for their personal growth, ridicule their sense of determination, or take advantage of them for personal gain.

You welcome and celebrate the accomplishments of others, exchange ideas, and share distinctive thought processes that may prove to alternate, higher roads of success.

And inversely, when you possess a special skill or knowledge, do not make it an obligation, but a passion to share what you know with those hungering for more.

For the system will thrive and dominate humanity’s progress unless we unite our individual strengths.

Overachieving is often a notion our society deems sought-worthy, however, upon achievement, the individual is more likely to be alienated or maltreated for standing out.

While nerd culture is more prominent and accepted now more than ever, and American culture is much more individualistic, witch-hunt and mob mentality still reign supreme.

So overachievers are hated on. Until people genuinely mature, or at least learn to keep nonconstructive criticism to themselves, I recommend ignoring the haters; you best believe haters hate cause they have nothing else of worth in their own lives to celebrate.

I have a friend who strives to be, in her words, a Jack-of-all-trades. And I admire her for that.

She develops skills quickly like a sponge on crack, and never does a lick of envy strike my heart as she elevates her skillset.

If ever she inquires for assistance, I’ll always be at her side to do the best I can to help her.

And whenever I’m in search of another’s perspective or insight, I ask her to lend me her expertise.

Mediocrity tends to be a consequence of fearing failure—don’t. Failure is only failure if you fail to learn from it.

We need to discard this suppressive, restrictive system no one speaks of, otherwise progress itself—in all its forms: artistic, academic, social, political, and technological—will never take root and flourish, resulting in a genocide of progress.