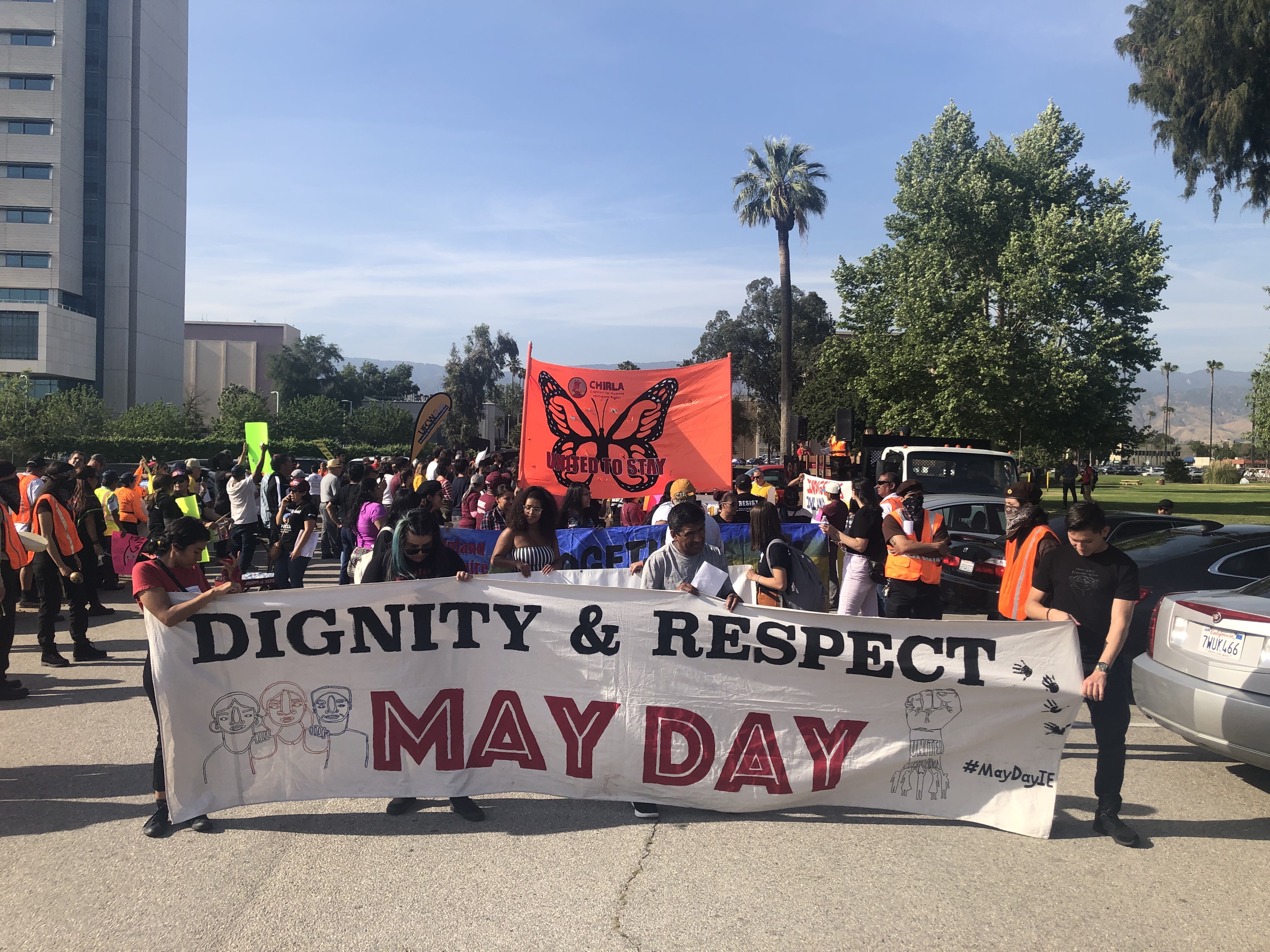 Organizations and people in the community of the Inland Empire joined the march and gathered at Meadowbrook Park for the introduction of the May Day march.

With posters, banners, music and chanting, people made their way over to the first stop at Service Employment International Union (SEIU), then to U.S. Immigration and Customs Enforcement (ICE) office, San Bernardino City Hall, San Bernardino County (San Bernardino county what?) and ended back at Meadowbrook Park.

There, they had sign up for action booths, food and a music celebration to end the night.

They all came together to march for International Workers’ Day. This day is meant to encourage change in labor laws, immigration, environment and safe communities.

“When I think about equitable justice and equitable society, I think of health-raw,” said Valdovinos Soto, (say who Valdovinos Soto is, what’s her position in this event?). “Health-raw is not just about providing every human being with medical access, it’s more than that. It’s about being able to provide every individual the right of living a dignified life.”

Najayra Valdovinos Soto continued her speech about health care for all in front of SEIU building.

[su_quote cite=”Valdovinos Soto”]”A life where we don’t have to see our family members die from treatable conditions due to lack of funds that cover the medical procedures, no one should suffer or die due to lack of access to health care simply because of where they were born.”[/su_quote]

As the crowd of protestors marched to (what is ICE? we need the full title before acronym) ICE they continued shouting and screaming from the top of their lungs… “What do we want? Immigrant rights! How do we get them? Abolish ICE!”

“San Bernardino County needs to be welcoming to all, to all and it’s not, some of these arrests are our street vendor’s who contribute to this economy, we just want to work, and they have been criminalizes,” announced Erika Flores, MC speaker at the event.

An example of a street vendor being arrested was the case Marcelina Rios.

“She was selling corn at an old town park onOct. 13, around 2 p.m. when a San Bernardino county sheriff deputy and Rancho Cucamonga park ranger stopped her. She was put in to West Valley Detention Center in Rancho, when she came out of jail there was two ICE agents waiting for her, she was then transferred to the Adelanto detention center and separated from her five children,” said Flores.

Throughout the march, chanting, screaming and music was playing in the street of downtown San Bernardino. People got to come together and fight stronger for everyone’s equality.

“If you know that you hold some type of privilege, make sure that you use the privilege to move the system forward. Get involved to make health for all be a reality for all the ones like us that do not have access to that,” said Flores.