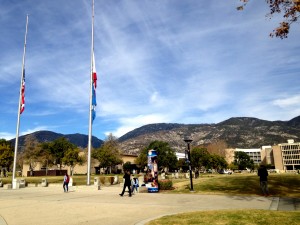 Syed Rizwan Farook, one of the suspected gunman in San Bernardino’s mass shooting, was a former student at CSUSB.

Farook is an alumnus from 2010, confirmed President Tomás Morales via e-mail.

Farook was an Environmental Sciences major and in 2008 made the Dean’s List, according to csusb.edu.

“We also expect that other victims will be connected, directly or indirectly, with the CSUSB family,” stated Morales.

At least three victims have been identified as CSUSB graduates, according to CSUSB Public Affairs.

Shannon Johnson received a bachelor’s degree in Health Science with a concentration in environmental health.

The victims names were released on Dec. 3 by the San Bernardino County Coroner.

CSUSB’s flags were lowered to half-staff to honor those killed during the shooting. A candle-light vigil will be held at San Manuel Stadium on Thursday, Dec. 3 at 6 p.m.