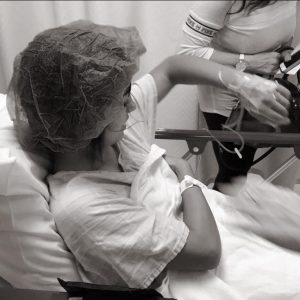 CSUSB soccer recruit Alexia Gonzalez is determined to get back on the pitch after her season ending injury.

With two months of recovery ahead of her, she is ready to take on the 2017 season.

Gonzalez tore her anterior cruciate ligament (ACL) just two weeks prior to the start of the 2016 season, which forced her to sit out the entire year.

Gonzalez, a Bakersfield native and two-time first team All-American choice at Taft College, was eager to take her soccer and leadership skills to the Division II level.

She was recruited to CSUSB by head coach LeBaron Hollimon, who stated that “she exhibits important character traits needed to be successful in the program.”

Every athlete’s worst nightmare became a reality for Gonzalez. She never imagined her season would come to such an unexpected end.

Hollimon collided with a teammate during a scrimmage at practice and immediately went to the ground.

Despite the positive encouragement from teammates, she knew exactly what had happened the moment she fell to the ground.

“I don’t think any athlete ever thinks it will happen to them until it does,” stated Gonzalez.

Right after the tear, she thought her time was being wasted now that she is injured.

A tear in the ACL is often caused when the athlete lands abruptly with their knee in a twisting motion, tearing the ligament. In other words, one of the tissues connecting the thigh bone to the shin bone tears.

The athletic trainers at CSUSB have set her up with a six-month rehabilitation program.

This minor setback has only made Gonzalez stronger mentally and physically.

She forced herself to take it one day at a time, and even if six months sounded like forever, she just had to keep pushing herself to get better.

When other athletes have days off, she does not.

“Everyone else can afford to take a day off, but I can’t and I won’t,” stated Gonzalez.

She has been doing everything and more to get back on the field ready to compete at the top level she was at prior to her season-ending injury.

Even coach Hollimon knows she is dedicated to doing whatever it takes to get back on the pitch.

“She is persistent and committed to being the best player she can be,” stated Hollimon.

Her major comeback starts with her new mindset.

After the injury, she has been dedicated to positive thinking. She is constantly watching motivational videos every chance she gets.

“It may take me time to come back 100%, but the only thing in my head is; how can I be the best,” stated Gonzalez.

Gonzalez’s motivation to become healthy, is not unnoticed.

Former Taft College teammate and current CSUSB teammate, Arielle Stoyanow, stated, “I am so amazed at how fast she is recovering, but it’s all because of her hard work and determination to set foot back on the field.”

Because of the injury, Gonzalez was forced to redshirt her junior year. She will still have two more years of athletic eligibility left.

Hollimon is optimistic about her situation, and stated, “it instantly gives the team a more mature player, a player who we know is a fighter because of the disappointment of having her season taken away last year, and a player that is very hungry.”

“Everyone can decide how to handle the ‘bad things’, but ultimately it’s up to you to decide how you will react and conquer it,” stated Gonzalez.

With two months of rehabilitation left until she is able to return to the field again, Gonzalez is going above and beyond to get her mindset and body right.