If you are a Latino who does not speak Spanish, then you know the awkward feeling of having to explain to someone why it is you do not speak the language of your ancestors.

That feeling is one that many Latinos in the U.S. have to constantly deal with, especially in a state as diverse as California. Many Latinos who do not speak Spanish feel as though they are being judged whenever they reveal that they are monolingual.

“When I talk to other Latinos who speak Spanish and they find out I don’t speak it, I feel like somewhat of a failure to my culture,” said Richard Olvera, a monolingual senior. “It’s like I have to make them understand that it wasn’t my choice to not learn Spanish; it was just that my parents chose to speak English at my house.”

Those Latinos who do speak Spanish believe that language is not only an important part of one’s culture, but that it can also be a huge advantage for anyone to know more than one language. 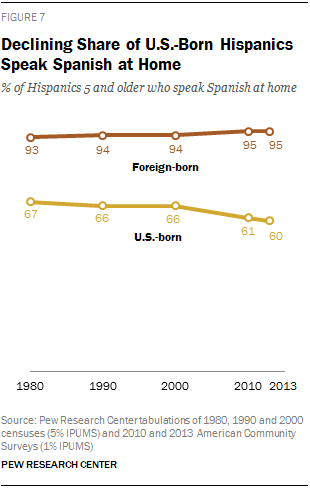 “Growing up in my house, Spanish is all we spoke,” said Gen Gonzalez, a bilingual senior. “My parents made sure that my siblings and I were fluent in Spanish because they didn’t want us to lose touch with our sense of culture. I feel like if you are a Latino and don’t know Spanish, then it would be smart to at least make an attempt to learn even just a little bit, because it is important and can create a lot of different opportunities.”

Despite the advantages that being bilingual can bring, we still see a decrease in the amount of Latinos who do not speak Spanish, even in our own area.

According to a study done through the Pew Research Center, there has been a steady decrease in the amount of Latinos who speak Spanish from 2006 to 2015. In the Riverside-San Bernardino-Ontario area specifically, there has been a decrease from 72 percent of Latino Spanish speakers in the area to 68 percent in the span of those nine years.

However, the ratio of the amount of Latinos who can speak Spanish compared to the overall Latino population has decreased from 78 percent to 73 percent.

Though language can be crucial in helping a person to create a sense of identity, it is not the only means for them to stay connected to their culture. According to Enrique Murillo, a professor at CSUSB and Coordinator of the National Latino Education Network, there are other ways for one to stay connected to their culture including traditions and visiting your home country.

“For many Latinos, speaking Spanish is an identity marker,” said Murillo. “But it doesn’t mean that because a person doesn’t speak Spanish they are any less Latino. Being Latino is mostly about the experience, and part of that experience is deciding whether or not you choose to teach your kids Spanish.”