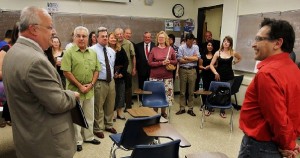 Juan Delgado will begin his role as Interim Provost on July 1.

As stated in an email sent by President Tomàs Morales, Delgado will not be considered as a candidate for the permanent position.

A nationwide search for a permanent candidate is underway.

Delgado will serve as Interim Provost until the fulfillment of the permanent position.

Delgado has been a part of the CSUSB faculty since 1988; serving as Assistant to the Provost, Chair of the English Department, and Interim Chair of the Communication Studies Department during his 27 years at CSUSB.

“His [Delgado’s] stellar university leadership experience combined with the strong relationships he enjoys amongst deans, vice presidents and our faculty make him an ideal candidate,” stated President Tomás Morales in an email to faculty.

“I am very appreciative of his willingness to support the university in this capacity over the coming year,” continued Morales.

Delgado also received the Golden Apple Award in 2013 and currently serves as a professor in the English Department.