Every day local musicians such as myself gather in garages and studios around the Inland Empire to create, practice and record original music. Bands spend thousands on gear and travel to play gigs with hopes of gaining fans and some extra cash.

There are ample amounts of bands that dedicate themselves to genres ranging from Metal to Folk and anywhere in between. With tribute bands taking over the bars and venues that actually pay talent, it makes an artist such as myself question what the future holds for unknown musicians that want to play original songs rather than covers.

But rather than get bogged down with the popularity of regurgitated tunes, I sought optimism from other local musicians experiencing a similar scenario. Lucio Venegas, a local producer and musician, said this when asked about the future of the Inland Empire’s music scene and original acts:

“I think it’s growing, it’s becoming a better scene, more bold. As long as there’s kids picking up a guitar or starting bands, whether it’s punk or whatever, there will always be the spirit of Rock and Roll.”

Lucio Venegas is also the drummer for the band I am a vocalist for called Electric Howlers and also for the indie rock band The Thin Lines. Both bands are based out of Riverside. 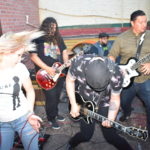 After a year of playing to smaller crowds and several non-paying gigs, Electric Howlers are fortunate enough to finally share their music at larger events that pay on a regular basis. But it’s still a struggle for local bands to secure valued spots at venues were consumers will gladly pay thirty dollars for a Beatles tribute band but scoff at paying five bucks for an original act.

Here’s an example of what acts get booked at higher paying venues (here’s a hint, ten of the thirteen acts are tribute bands for the month of March!).

Robert Pierce, friend and local guitarist of the Electric Howlers, had this to say about playing original rock and roll in a time of tribute band oversaturation.

“Just cause it’s not on the charts doesn’t mean it’s not being made. If you look anywhere. If you look hard enough, not just what’s on the radio, you’ll find it. All you gotta do is look.”

Watch the full interview below.

Downtown Riverside is home to many music venues, but only a few are dedicated to showcasing local talent. While there are a few different reasons for this copycat culture phenomenon, the main one is financial.

Consumers love basking in nostalgia and will pay to hear live renditions of better days gone by. But for those adventurous souls, here are some local venues where you’re sure to hear new and upcoming talent emerging from the pits of the past. These venues include Back to the Grind, Pixels, Mission Tobacco Lounge, The Vault, and The Menagerie. Below is the map to the heart of Downtown Riverside.

There’s local music to discover almost every night of the week in Riverside and the surrounding areas. Some of the more popular nights for local talent include Sunday evenings at Pixels and

Monday night R.U.P.O at Back To The Grind.

You can catch Lucio, Robert, and myself live with the Electric Howlers at Romano’s Concert Lounge on 3/09/2019 at 9 p.m. opening for local legends The Bell Rays! The BellRays formed in the early ’90s and have made a name for themselves all over the world and are currently ending their U.S. tour at Romano’s in downtown Riverside on 03/09/2019. They are an inspiration to all local bands starting their own personal journey with the music business.

Support local music and keep the spirit Rock and Roll exciting and new! Keep your eye open for Saturation Fest happening next month in downtown Riverside. Find updates on bands, vendors, and local artist in the link below. An aspiring artist wishing to take part in the three-day event can find information there as well.

If you ever doubt whether or not to go check out a new band, you should always Go see and support those bands! You can also lend your online support by listening to tunes like this one from the Electric Howlers called “Send Me Your Love”. Every person counts when it comes to building an audience for an independent artist trying to get their voice heard.