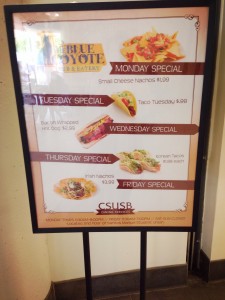 I have found that Sodexo’s on-campus food pricing is comparable to off-campus fast food and lowering the prices will strain the workers financially, so if you don’t like it bring your own food.

Generally, a combo meal at any fast food restaurant will cost around $7 and the same can be said for the majority of food establishments on campus.

However, many students believe that food pricing on campus is way too high.

“My tuition is way too much for me to be spending about $10 on campus just for food,” said student Courtney Cypert.

Cypert also said that she didn’t believe there were enough food choices on campus, and that she would rather not spend money on indecent food.

The price of meal plans are also a source of controversy.

If students were to buy every meal on our campus over the course of a quarter, they would run out of money by the fifth week.

How much money do other schools offer students for meal plans? I looked at Suffolk University meal plan website who’s food services is also managed by Sodexo.

On their website they state that their “meal plan” costing $2,412 per year (comparable the CSUSB’s meal plan price), is “designed for those students who, because of their schedule or commitments, cannot always eat all their meals on campus.”

CSUSB does not offer a meal plan that covers a full quarter of three square meals per day.

Evidently, the university does not expect its students to eat on campus for every meal.

I think food pricing at CSUSB is typically normal in comparison to what you would find off campus.

I wouldn’t expect the university to sell their students really low costing food.

The university purchases the food and hires employees to serve and prepare it. Which affects the pricing.

If the university were to lower the food prices, those employees would have to take a pay cut, which would probably put a strain on them financially.

They work hard to prepare quality food for the student body and keep our eating areas clean.

They do not deserve to receive pay cuts.

If you believe that food pricing at CSUSB is too expensive, then perhaps bringing food from home would be a better option for you.

Buying in bulk is usually always a cheaper solution, so meals prepared at home would be more cost efficient.

“The food on campus is great, but I can’t afford to eat it all the time, that’s why I usually just bring a lunch,” said student Jordan Rickard.

No matter if you choose to eat on or off campus you should always expect to pay around the same price range.

Campus dining is no different than dining at any other restaurant that is off campus.

Dining on campus does not mean you will eat cheap

Sodexo's food assaults tastebuds
Commons gets it right, but should be open late night
Healthier food options found at the commons