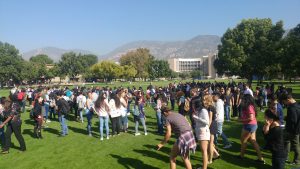 CSUSB participated in the Great ShakeOut, the world’s largest earthquake drill, and evacuated hundreds of students and faculty within minutes.

Over the university’s announcement system and via the emergency text line, students and staff were instructed to duck and cover.

Minutes after the simulated quake, buildings were evacuated entirely.

However, some buildings, like University Hall, had police officers go into the buildings to practice an emergency scenario and help facilitate the evacuation.

Evacuees were led to open areas away from any structures where they awaited further instructions, including the all clear sign that was again sent over the emergency alert text line.

Officials with megaphones administered the group of evacuees by keeping them off sidewalks in the event emergency vehicles had to use the pathways as well as to stay clear of any buildings that may collapse.

At one of the evacuation locations a student approached on of the officials stating that he goes to another school and was just visiting CSUSB campus. Immediately, the official radioed in the situation to contact the student’s school to let them know he was accounted for.

The drill ran smoothly and professionally even though some people made light of the mock quake.

CSUSB was one of the hundreds of schools that participated in this drill in California along with all government buildings and some businesses.

The Great ShakeOut is practiced in multiple countries around the world with an estimated 38 million participants.

Over 10 million of the participants are from California.

It helps schools and other organizations practice the efficiency of the emergency systems they have set in place.

This is especially important in California, as the state is highly prone to earthquakes and experts estimate a massive quake is coming sometime soon. It is important to be prepared for earthquakes and similar disasters.

Whether at school, work or home, it is good to have a disaster plan and necessary supplies.

California has been experiencing a rise in home and business owners purchasing earthquake insurance. It is more available and affordable than it has been in previous years.

The Great ShakeOut website provides details on all related matters.

Are you ready to rumble?
Fracking = earthquakes
Drop, Cover, and Hold On