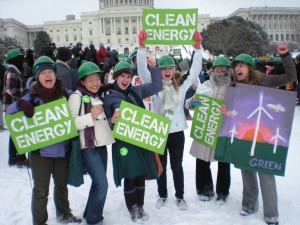 Governor Jerry Brown reached out to fellow governors two weeks ago to encourage a California-style plan for cleaner air.

Brown’s goal for the meeting was for other states, along with federal government, to adopt some of California’s key elements in their environmental agenda.

Some of his cleaner energy goals are to de-carbonize the economy by decreasing 10 percent of carbon in gasoline by the end of the decade. He also plans to advance the state’s mandate for renewable energy.

“I think what he’s doing shows great initiative,” said Quintana. “People don’t realize that if we don’t start acting now then our future generation will suffer from this. I don’t want my great-grand-children to suffer from an unknown epidemic.”

If other states and countries take on these measures, then it will ultimately help the climate change.

Indeed, these goals have been successful in creating jobs, but it will also be costly to businesses since upgrading to cleaner manufacturing technologies will raise the price of their energy.

If Brown fails to convince others to take measures, then California will be spending more money on cleaner energy while neighboring states will continue with cheaper energy traditions.

In Brown’s State of the State address on Jan. 24, he talked about the dangers we could be facing in the long run if people decide not to take action.

“When we think about California’s future, no long term liability presents as great a danger to our well-being as the buildup of carbon dioxide and other greenhouse gases in the atmosphere,” said Brown.

Brown added, “Carbon dioxide emissions are the highest in 15 million years. At today’s emissions rate, the planet could warm by more than seven degrees Fahrenheit by the end of the century, and event unknown in human experience.”

California has been successful in implementing ideas that has helped the environment in the past.

According to an article in the LA Times, back in 1975, California required for the use of catalytic converters. These converters were able to reduce pollution from cars and within the next six years the federal government required all cars sold in the U.S. to have them.

Brown has already taken measures to help the environment and is continuing to spread the word.

During the National Governors Assn. Meeting in Washington, Brown asked for the support of other states an counties because California won’t be able to do it alone.

“We can’t do it alone,” said Brown, “We need other states. We need China. We need India.”

He is scheduled to visit China in April for a week and will focus on the topic of climate change during his visit.

Brown’s itinerary will include a visit to one of China’s most polluted city, Guangdong, to reduce the production and discharge of harmful gases.

The responses from the rest of the states are still unknown, and they will not be discussed till further notice.