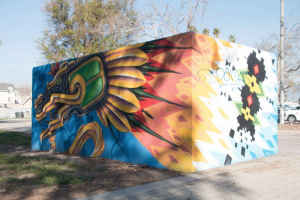 It is our moral obligation as citizens of San Bernardino to help guide the younger generation to become more involved with political activism and civic engagement, and this is just what San Bernardino’s Generation Now group is about.

Once small but now expanding San Bernardino group Generation Now has taken it upon itself to help improve the quality of life in the city by mixing its members’ love of the arts with their love of politics.

“We want to empower people from the community, we saw hope in the city and wanted to restore hope in others,” said Christian Flores, a member from Generation Now.

“When you get involved with what is happening in the community that’s when you really learn and make the most difference, our goal is to shift the culture and make the youth aware of all the different facets available to them,” added Flores.

Plus, it is an financial booster.

This group originally started in 2012 and after the city declared bankruptcy more people from the community wanted to get involved to help rebuild their city.

Flores noted that they currently have 10 to 15 active members and about half actively take on projects and the others members play supportive role.

Not only does this group stress the importance of voting to youth, they also have a love of the arts and host political cartoonist drawing nights.

They also help feed the homeless and take part in cleaning up our local parks.

One of the parks they cleaned up, Seccombe Park, now has over 20 murals painted on the walls thanks to Generation Now’s co-founder Michael Segura.

“I am starting to see more updates with them recently, they are expanding fast and I think they are making a better effort then the city government is,” said student Rudy Gamez.

It is because this group has had such success with getting the younger generation involved that similar groups in Washington in particular have become inspired and decided to model their programs after San Bernardino’s Generation Now group.

One major characteristic that sets Generation Now apart from other groups, is that they focus on getting the youth involved with political engagement locally where they can make a difference, rather than on a global scale.

“I have lived here my whole life and thought this is definitely something I want to be a part of,” said student Fabian Torres.

“Generation Now had leeway with CSUSB and they came into one of my classes and talked to us about what they were doing,” continued Torres.