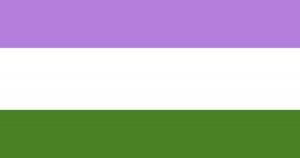 They are your friends, neighbors and family members beyond boys and girls, gender awareness and education is essential within the United States.

The term Gender-queer can be defined as an umbrella term that describes individuals who do not identify with traditional male or female identities.

There is no clear statistics stating how many individuals claim a gender-queer identity because of the negativity involved.

“(Gender-queer) for me, it means closeted, I don’t feel safe coming out and declaring myself it is a very personal choice” said Kaitlyn Catherine, gender-queer, 30.

“In private I wear feminine clothing and makeup, but in public I am a man that is the way I grew up and I cannot let go of that public image because of the fear I feel from family and the public” continued Catherine.

According to a survey in the 2016 hate crime report in the UK conducted by Galop, one in four people in the LGBT are victims of a hate crime with the highest percentage with over 60% of those victims fall under the  gender-queer umbrella.

Though at times there are exceptions, Princess Palafox, an openly gender-queer person, has had the privilege of leading a normal positive lifestyle with the aide of his friends, family, and coworkers.

“I can’t speak for everyone but I feel like it was easy for me, I have had people stare and question when I dress like a girl but it gives me power and confidence.” said Palafox.

“Even when I dress like a boy people see me as a girl but I really don’t care but I feel like I have never had any fear because I live in California, I have been very fortunate and I try to stay positive.” continued Palafox.

A gender-queer experience can vary from person to person, normalizing the gender-queer identity begins with awareness and ends with acceptance.

The LGBTQ is fearful because of the current political climate which has unclear plans towards Title IX which is currently in place to protect any person from discrimination for their sex or gender.

It is important to know where to find resources and safe spaces for those whom identify as gender-queer or are questioning.

Irene Tobias, CSUSB student and ally discusses the importance of allies within the LGBTQ community at the Women’s Resource Center.

“I believe its important to be an advocate trans youth for transgendered youth because have the highest suicide rate and their average lifespan is 30 years old, they don’t have a ton of resources or support.” said Tobias.

Slowly but surely the gender-queer identity is receiving awareness more and more celebrities have come forward as gender-queer such as Tilda Swinton, Ruby Rose, JD Samson, Steven Tyler, and even Miley Cyrus.

Representation for those questioning those identities are crucial for breaking gender-queer barriers.

Internet personality and self identified gender-queer, Tori Huit, explains their perspective on gender.

“When I did some serious thinking about gender I tried to flush out what I saw as a man or a woman and I realized that nowadays I don’t really see gender as anything.” said Huit.

Continued Huit, “When you strip away the social context of oppression and gender roles, gender is just an abstraction, so I don’t feel like I have a gender.”

(Note: Some names used are the preferred gender-queer names, not their legal names.)