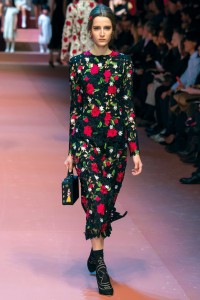 The collections are sure to inspire fashionistas looking to make a statement.

Although the collections shown on the runway are expensive for the average Joe, Fashion Week does inspire new looks that can be created in your local thrift store for a less expensive price.

My assignment was to complete a $20 thrift store challenge to try and recreate some of these Fashion Week extravagant outfits.

I accepted the challenge and I headed to Eco Thrift on E. Street in San Bernardino.

The clothing items were practically new and priced at a ridiculously low prices.

Surprisingly, the Fashion Week inspired outfits I created were a steal, not even adding up to $10.

A floral print dress that closely resembled a Dolce and Gabbana’s Fall dress was tagged at only $3.98 and that’s not including the 25 percent discount. 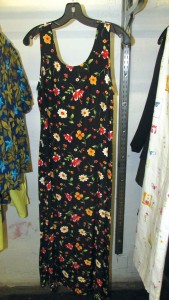 Chanel used pastel pink blazers paired with skirts in their Spring collection. A two-piece outfit I found at the thrift store strongly resembled the Chanel look and was priced at $3.98.

A full inspired look from Dolce and Gabbana, including shoes, was a little under $16. This look consisted of a black skirt stretching a little past the knees with a button up blazer and flats to match.

I recreated the look using a black dress priced at $3.98 with a similar black button up blazer priced at $9.98 and to finish it off, black flats priced at 99 cents.

Many were excited about Kanye’s collaboration with Adidas.

“I followed Kanye’s line during New York’s Fashion Week,” said Brandon Sanchez, a second-year CSUSB student. “Mostly because he collaborated with Adidas and also leaked a song from his ‘So Help Me God’ album.”

I happened to find a Kanye-inspired look that I was able to recreate.

The look was based off an over-sized men’s green crew neck that was featured in his collection. I found a similar crew neck priced at $3.98 in the thrift store.

Although my challenge was fun to complete, most people don’t necessarily shop based off what they see in these Fashion Week collections.

“I don’t think I follow trends. I wear what I like, and I believe that just because you want to wear something someone else is wearing doesn’t mean you’re ‘following’ a trend,” said Saul Sandoval, second-year student .

Whether you follow these fashionable looks or stick to your own look, thrift store shopping can definitely be said to be a convenient way to splurge when shopping on a budget.