By Marion Gil and Marlyn Rodriguez |Opinion and News Editors| 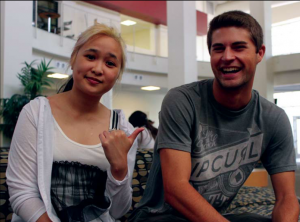 Syndy Malit and Robert “Robbie” Rigby are best friends who are fortunate enough to graduate together.
The dynamic duo met during their freshmen year at orientation and were not only placed in the same group but later had their first chemistry class scheduled together.
It was during that fateful chemistry class that they discovered they were both part of the same scholarship program.
“We met at SOAR orientation, worried about which classes to take and having no friends,” said Malit. “Our professors scheduled our first chemistry class together, and we learned we were both PAES scholars. So we planned the rest of our schedules together and have been inseparable since.”
The pair really had become inseparable, the kind of packaged deal that only the closest friends become.
“Teachers and friends thought of us as a set. You really wouldn’t find one without the other,” said Malit.
The pair has been scheduling their classes together ever since. While some would assume that going to every class with your best friend would be a distraction, Malit felt assurance at having her friend always close by.
“Having someone you know in your classes gives you this sense of peace, so it calmed my fear in talking to people,” said Malit. “I would be more open in approaching other people.”
“It improved my academics. We have always been there for each other and she made a great study partner,” said Rigby.
“It all started after SOAR. After SOAR, we had almost every class together,” said Rigby. “We probably wouldn’t have been as close if we didn’t meet during SOAR, but I’m glad we met then because our friendship made college easier.”
It wasn’t just support against fears and anxieties when they were together, they also pushed each other academically, always cheering the other on to keep going.
“Seeing each other every day, it’s a constant reminder of what our goals are,” said Malit. “Robby’s the type of guy that does everything when it’s given to him, I’m the type of person to do something the night before. But having to work with Robby, I was forced to do my work on time.”
“Since I’m the lazier of the two, there’s plenty of times that I just wanted to give up on homework. But Robby’s always pushed me to finish. When Robby stresses about upcoming tests, I’m there to calm him down,” added Malit.
In between academics, they have their fair share of friendly shenanigans.
“I got my department to start calling Robby the Mystical Unicorn,” said Malit. “He’s the trifecta. Good looking, smart, and nice. Mystical.”
It isn’t all sunshine and rainbows in the land of best friends though; Malit and Rigby had their fair share of arguments as well.
They don’t let it get to their friendship, however.
“Our friendship is probably the weirdest anyone has seen,” said Malit. “We’ll be arguing over what an answer would be for five minutes, but after five seconds the anger would just dissipate. Compartmentalization was something we both mastered.”
Despite all of the academics, all of the learning and the hardships, going through college together and all of the academic priorities and formalities that come with it, Malit and Rigby are just like any other best friends, and it shows.
“I think we laugh at each other more than we say words to each other. We joke about almost everything,” said Malit. “I mean, how funny can Chemistry be? With a close friend it can be hilarious.”
She went on to add, “Our friendship is the perfect blend. We crack childish jokes, have some mature conversations here and there, but we keep things educationally fun. The best.”
Malit and Rigby intend to stay friends even after they graduate, and they believe they’ll always be friends.
“She is going to become a pharmacist and I’m going to be a doctor,” said Rigby. “There’s talk that one day we will open a private clinic.”
“We’re probably going to bug each other until we’re dead,” said Malit.