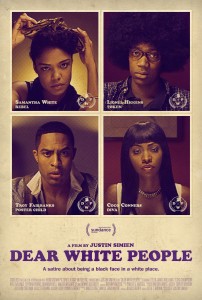 Recent events, sparked by the protests of Michael Brown and Eric Garner, have occurred throughout the country and have made people more aware about racism and police brutality.

The movie, “Dear White People” has given a representation to these events.

Brown was a young man killed by a police officer in Michigan for stealing something from a convenience store, and Garner was arrested by New York police and died when they put him in an illegal choke-hold during his apprehension.

In my opinion, these acts are depicted and represented perfectly by the film “Dear White People.”

The film, although fiction, shows how America is clearly a nation that has racism even if some don’t believe this.

The film takes place at an Ivy League University where white people are symbolic of privileged citizens who seem to “tolerate” their black colleagues.

The University acts as a representation of society, showing how white people, or people of privilege, are tolerant of people of color and act as if racism doesn’t exist.

But when a half-black, half-white student starts a radio talk show that clearly outlines the racism at the university it would then tear everything asunder.

The talk show called “Dear White People” tells all white students at the school that the actions they are doing with other black students are sometimes considered racist.

The film takes a turn when a group of white people decided to have an epic Halloween party with a
“ghetto black” theme, making the men dress like a stereotypical black thug and the women to wear skimpy clothes and be completely illiterate.

This was the last straw for the black student union and they made an appearance at the party by stopping it with a mob of people of color.

Although fictional, the film shows issues like black students being given labels such as “token,” “prodigy,” “rebel,” and “white-washed,” which all have meanings within the hegemonic system the university prides itself on.

These characters play into these troubling roles because they have some sort of underlining issue that would later be revealed at the end of the movie.

Most wouldn’t have recognized them during the movie since the film did not place labels that viewers could identify.

These characters are outcast because they chose to have their own individuality and not fit into the university’s societal roles and what place they fit into.

This shows how one is pressured to fit into a mold or be thrown out by the society that is trying to place them in the spot they need to be.

Much like a time that white people choose to avoid, when a conversation about slavery and oppression is started white people are almost crippled by shame and guilt- making them feel uncomfortable and defensive of a negative history that their white ancestors have created for them.

By choosing not to talk about this they are able to give themselves some sort of pass in guilt or shame that they should feel when this is brought up in conversation.

As I have mentioned before, this movie is completely fiction but due to the recent events that have happened within this country, these issues cannot go ignored.

America is a country that prides itself on capitalism, propriety and acceptance for all of its people, but when Brown and Garner are clear examples that oppression and a hegemonic society are alive and well within America, its makes you want to stop and take a good look at what really is the “American Dream.”