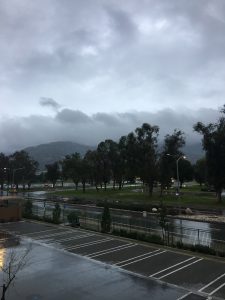 Inclement weather puts athletes in the face of danger and interferes with scheduled matches and practices for outdoor sports.

Game officials are forced to delay, postpone or cancel games due to bad weather despite their best efforts to see that each game is played to its conclusion.

Coaches unwillingly give their teams a day off of practice because the weather makes it impossible to hold productive training sessions.

For women’s soccer Head Coach, LeBaron Hollimon, it pains him to cancel crucial practice sessions while his team is off-season and trying to prepare for the upcoming year.

“Looking at the forecast, there’s a good chance we’d be out training in an unnecessary situation as it relates to the part of the season we’re in,” said Hollimon as he addressed his team.

Teams discontinue play when the weather changes because conditions can affect playing quality and the safety of the athletes.

“We’ve had multiple games canceled during the spring season because the field gets covered in snow and it’s not safe, the field also gets ruined because we have real grass opposed to turf,” said Ma’ila Aluli, a women’s soccer player at Fort Lewis College in Colorado.

It is evident that every sport has potential to be dangerous, but cold weather seriously increases the risk of injury.

The main dangers of playing in the snow are: hypothermia, frostbite, sunburn and an increased risk of muscle strains.

Exercising in cold weather places extra demands on the body.

It is important for athletes to properly warm up their muscles before playing in the cold to avoid muscle pulls and strains.

“We’ve practiced in the snow before but it’s not ideal, as the ground is mushy and cold,” Aluli said.

Because snow makes the ground uneven, it becomes difficult and uncomfortable to run on. This can be dangerous because it increases the chance of ankle or knee injury.

Outdoor teams do their best to make accommodations if they face weather problems.

“When it snows a lot, we practice indoors in the gym,” Aluli said.

But the snow isn’t the only thing that sets her team back.

“We have a lot of lightning delays as well and we have to go into the locker room until it’s clear,” Aluli added.

Lightning delays can last from 15 minutes to an hour if necessary.

When a circumstance poses a threat to the safety of participants or spectators, a decision has to be made to either continue or stop playing.

In the rule book for the National Football League (NFL), under “Emergencies and Unfair Acts,” it recognizes that conflicts will arise and “such circumstances may include severely inclement weather, natural or man-made disaster, power failure and spectator interference.”

However, in the NFL, only the commissioner and the league president have the authority to postpone, cancel or terminate games. Referees may only stop play temporarily.

For all outdoor sports like soccer, football, softball, baseball and golf, inclement weather stands in the way of the team’s normal routine and compels athletes to take extra measures in preventing injury.