San Bernardino, CA- The number one ranked CSUSB Womens’s Volleyball team is slated to play their first home match of the season this weekend in the newly renovated Coussouilis Arena.

The Coyotes began the season as the number two ranked team in the country but have quickly regained the top spot. After going undefeated through the first 9 games, the Coyotes will return home to open play in their new arena. The arena received a new floor as well as new digital scoreboards.

The Coyotes are riding a hot streak coming into their home opener. The team is yet to go to a fifth set and has defeated two ranked opponents. University of Minnesota Duluth is a top 10 team whom the Coyotes defeated 3-1 while also defeating Tarleton State, a top 25 team whom they defeated in straight sets, 3-0. Kaili Scott who is a redshirt junior on the team says this about this year’s team. “We have so much talent on this team. We really want to make it back to the elite 8 and have a chance at the National Championship”. This comes one season after the Coyotes were knocked out of the Regional Championship by the Vikings of Western Washington University. 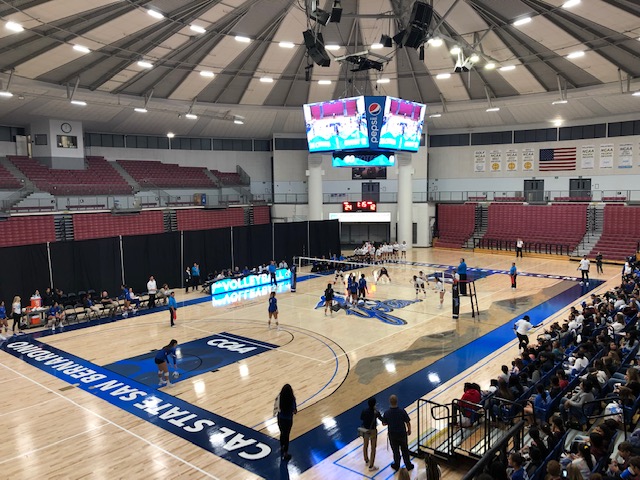 The renovations made to the arena began just after the conclusion of the 18-19 Academic Year. These were renovations that needed to be made according to the Game Operations and Facilities Coordinator, Annette Hollimon. “We needed to update the score boards to keep up with some other schools in our conference and the new floor in the arena here at CSUSB was well overdue for replacement. This being said, CSUSB has arguably the best arena in the CCAA (California Collegiate Athletic Association) and just needed a little face lift” said Hollimon.

Volleyball is not the only team that is benefiting from these renovations. Andy Newman’s Men’s basketball team will also be playing in the arena come the winter quarter as well as the Women’s basketball team. “Having an atmosphere like Coussouilis Arena is an experience like no other” said Kaili Scott.

Jeremy Minnick who is a member of the Men’s Basketball team had this to say about the new arena renovations. “Having a place like Coussouilis Arena to play and practice is something that every player wants. This arena does nothing but give you an amazing atmosphere to get better”. Jeremy is a two-sport athlete here at CSUSB and will playing in his first basketball season for the Yotes this winter.

For students living on campus, all home events are free to attend. The Arena is in the HP building and is host to all home volleyball and basketball games. If you and your friends are looking for something to do around campus, stop by and take a look at the newly renovated Coussouilis Arena.