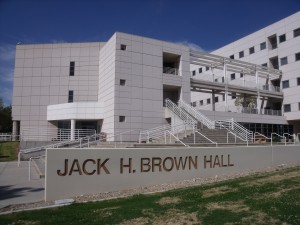 CSUSB’s Master’s in Business Administration (MBA) program has been ranked 2 in a global top 20 list.

“Congratulations, CSUSB. That is an incredible accomplishment for a college campus in San Bernardino, CA. I wonder how many people outside of the Inland Empire have even heard of the school,” said student Clint Reeves.

“I had no idea that our school was on any kind of ranking list. I hate to say it, but I am kind of shocked,” said student Antonio Alvarado. CSUSB earned the ranking of 2 in their “Tier One” category of both North American and European MBA rankings of CEO Magazine.

“I think I can speak for myself and all of the business students when I say that awards like this really help motivate us and build our confidence in the path we have taken,” said Billy Ramirez, a business major.

According to CEO Magazine, the rankings are based upon indicators considered to be of interest and value for students such as: Class size, international diversity, faculty-to-student ratios, student-work experience, and the qualifications of faculty (academically and professionally).

Victor Callender, founder of CEO Magazine and chief executive officer, said he uses these factors because he believes it is important for schools, especially with constantly increasing competition amongst schools, to understand what the students want.

“Bigger is not always better, and our aim is to highlight schools that offer exceptional value and quality, and increase the choices available to our readers when faced with the difficult decision of where to study their MBA,” said Callender.

“I have actually considered picking business as my major, and now knowing how good of a department it is just might have make it easier for me to finally pick a major,” said student Mae Soto.

The aim is to, “Strip away elements such as salary increases, career progression, international and gender diversity in academic boards, the number of doctoral graduates from the school, and how many of them return to teach at said school,” said Alexandra Skinner, Editor-in-chief for CEO Magazine.

Skinner adds that they want to keep the rankings “simple” and highlight “lesser-known schools, which would otherwise be marginalized” because they have quality and value to service post-graduates. The IGF is designed to provide a 360 degree view of the world’s business schools to “High-potential managers,” according to CEO Magazine.

Washington Monthly magazine ranked CSUSB as number 19 in the nation of universities offering master degrees. In 2012, U.S. News and World Report ranked CSUSB number 17 among the Top Regional Public Universities in the West and number 54 among all western universities.