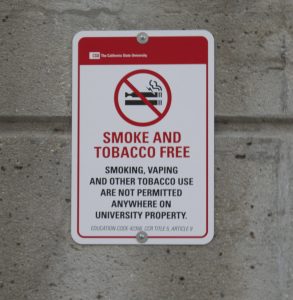 Chancellor Timothy P. White’s Executive Order 1108 that bans the use of tobacco and all related products from the CSUSB campus has been receiving mixed reviews.

This includes banning e-cigarettes, vaporizers, snuff and chewing tobacco on all CSU campuses, claiming that it will promote a healthier, safer learning environment.

The health risks of tobacco have been thoroughly studied and it is well known that smoking is unhealthy.

However, students and faculty who are regular tobacco users are having a difficult time with this ban as they have to leave campus entirely in order to smoke.

“Yeah, it’s definitely a pain to have to leave,” said CSUSB student Jessica Gonzales. “I mean, I’m not a heavy smoker but, when I want a cigarette, I don’t want to have to go on a hike.”

CSUSB will provide absolutely no smoking zones on campus property, including sidewalks and parking lots.

Ash trays have been removed and smoke-free campus signs have been placed all around CSUSB.

“It is a little excessive to completely ban smoking since many students use it to cope with stress and anxiety,” said Lucatero. “Designated smoking areas away from buildings would be sufficient.”

There has been plenty of backlash on this legislation from students and faculty who are both smokers and non-smokers.

However, there are multiple advantages of the ban to be weighed into the equation.

The CDC states that smoking bans help to limit the daily percentages of cigarettes smoked by students and faculty, and has lead to an increase in people who quit smoking.

Smoking is harmful to physical features. It can turn white teeth brown with tar on them, cause premature wrinkling and even give hair, clothes and the body a distinct odor.

Smoking can also lead to lung problems and cancers.

“My grandmother just passed away from lung cancer,” said freshman Patrick Haun. “I know she tried to quit multiple times but it was just too late at that point.”

Secondhand smoke can travel through walls and ventilation and can be harmful to anyone near the smoker.  Since 1964, there have been over 2,500,000 nonsmokers die from health problems caused by exposure to secondhand smoke.

Smoking is the single largest cause of preventable disease and death in the United States.

Dimitri Tamalis, a member on the smoke free task force and a former smoker himself believes that we as a school and community have ways to combat addiction to smoking.

“The idea is to create a culture discouraging harmful behavior,” said Tamalis. “It’s an effort that is collective.”

On average, a smoker is more likely to die 10 years before those who are nonsmokers.

Enforcing a smoke free campus may seem like it violates a person’s freedom. However, there is no legislation in the U.S. that states smoking is a right.

Order 1108 is a strong motivator for smokers on campus to consider quitting.

Grace Johnson, Director of the Student Health Center, knows that this transition might be hard for some students and faculty, but believes that if everyone works together, we can make the school healthier and friendlier for everyone.

With the Student Health Center providing many resources for smokers who may want to quit, now is a good time to consider it.

Additionally, the school pharmacy started selling safe alternatives to smoking like patches, gum, and lozenges to help ease the urge to smoke.

“Our goal was to put as many things in place so that there are resources,” said Johnson.