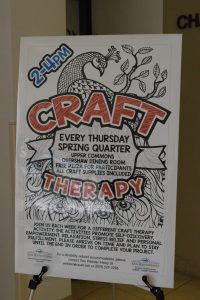 CSUSB students who participated in the Craft Therapy session on Thursday, April 6 confirmed that crafting did help them to relax and relieve stress.

The event began with a few minutes of socializing among the participating students.

Heather Webster-Henry, Outreach Coordinator as well as Family and Marriage Therapist from the Counseling and Psychological Services, described the event as “an experience where the chatter of the mind is pushed aside.”

The craft for the April 6 event was blackout poetry, and every week the craft changes.

Once ready, students were asked to examine a page from a book and mark any words that stood out to them.

After a while, designs began forming that created a visual poem, making the words pop off of the page.

Students who attended craft therapy claimed that they did experience a relieved mental state of mind.

“It keeps your mind off the problems you have like you know with the new quarter,” said  student Jose Angel Hernandez.

This event is planned for every Thursday afternoon this quarter, offering students multiple opportunities to attend.

“We wanted to do it kind of late in the week where classes may be over for them for the week and give them a way to recharge and go into the weekend feeling refreshed,” said Tess Webster-Henry.

“I think it’s good for them to take care of themselves, do something creative, something just for them.  We get kind of locked into work and school and it’s all work. This is a time to recharge and have fun and learn about themselves a bit,” continued Tess Webster-Henry.

She made it a point that all majors at CSUSB are recommended to attend craft therapy.

“Not everyone here is an art major so trying to let people creatively express themselves and maybe they are a math major or something and they don’t get a lot of opportunities to do that,” said Webster-Henry.

Peer Health Educator, Kassandra Johnston, helped host the event. She also participated in the craft session, and encouraged all students to come and relieve stress.

“Try something new and maybe something that you wouldn’t have normally been exposed to,” said Johnston.

“You don’t have to be an artist to do something like this. You can just be any kind of student,” Johnston continued.

The attendance for the first week was much higher than expected, and this encouraged the facilitators to gather more supplies for the coming weeks.