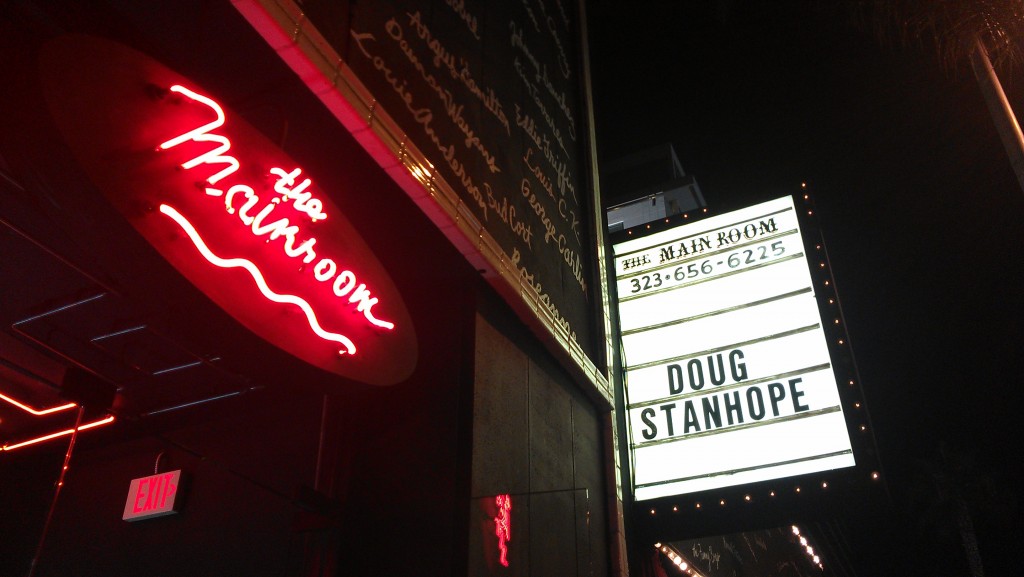 While waiting for the show to begin, I ask my cousin Jesse Rojas, “How many people here do you think have no idea what they are getting themselves into?” My cousin laughed and looked around the venue and said, “I’m sure there are a few.”

He defiantly stands in the face of the mainstream with middle fingers in the air while more known comics get labeled as “offensive,” “uncensored,” “shocking,” “profane,” or “vulgar,” but stand-up comedian Doug Stanhope puts them to shame

Doug Stanhope performed at the legendary comedy club, The Comedy Store, in Los Angeles on August 21 as part of his “Last Gasp Tour,” the first night of two that he would perform at the venue.

It was a rare show for Stanhope who is known to avoid conventional comedy clubs and to even avoid well-known cities.

As you would expect, Stanhope is known to attract a motley fan base of ages and personalities, though the misfits of society tend to be the most common fan.

My cousin and I arrived at the club about an hour before doors opened, hoping to get good seats for the show.

Shortly after getting in line, a woman walks over in high heels, leather pants, a loose jacket, and a fish-net shirt with no bra underneath.

She starts flashing her breasts to the people stuck in the Sunset Blvd traffic who are no more than five-feet away, and I immediately think I have a prostitute standing next to me trying to attract customers.

This continues for another five minutes when two men, one with a giant mass of rainbow-colored dreadlocks, run from across the street to greet her and it is soon apparent that they are friends and here for the show too. 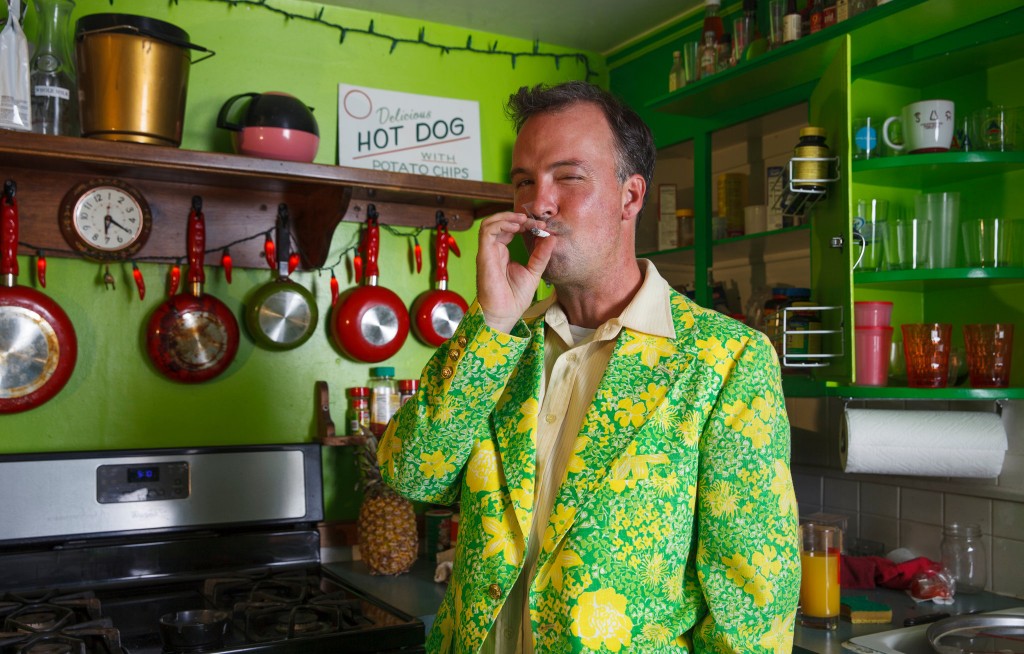 At 8 p.m. they begin letting us in the venue and checking everyone’s identifications to make sure no one is under 21 years-old. We are immediately informed that there is a two drink minimum per person.

We are seated within arm-length distance of the stage and immediately waitresses begin making rounds to the tables to get orders from our menus that consist of greasy appetizers and assorted alcoholic beverages.

After an hour of some 300 people drinking; the show began.

Stanhope had two comics open for him, one performing a small five minute set, and the next, Geoff Tate, performing about a 15-minute set.

Both openers did a great job and had everyone laughing, but it is no stretch to assume those who knew what they got themselves into only cared about Stanhope.

Stanhope walked out to a roar of applause; in one hand he held an empty plastic jug of vodka, and in the other hand he held two glasses of a clear ice-cold beverage, presumably the last of what used to be in the empty jug.

He started off by talking about how he was feeling nervous for this particular show because he knows a lot of people in Los Angeles and plenty were at this very show to watch him, but a few drinks before the show fixed his nervousness.

Stanhope also mentions that he resisted an offer for some “blow” (also known as: cocaine) before the show, because he watched a show of his a few weeks prior when he did not resist the same temptation, and he found himself yelling at the screen with criticism.

A sheet of paper was pulled from his pocket that he explained were his notes, but they were not for him in case he forgot his material, they were actually to prevent him from talking too much and rambling during his routine.

He puts the piece of paper away and says, “Robin Williams.” The crowd is a mixture of laughs and groans.

Stanhope explains that he really wanted to have a Robin Williams joke, he really tried, but sometimes you just can’t think of anything.

He compliments Williams and recalls that Williams once gave him great praise. 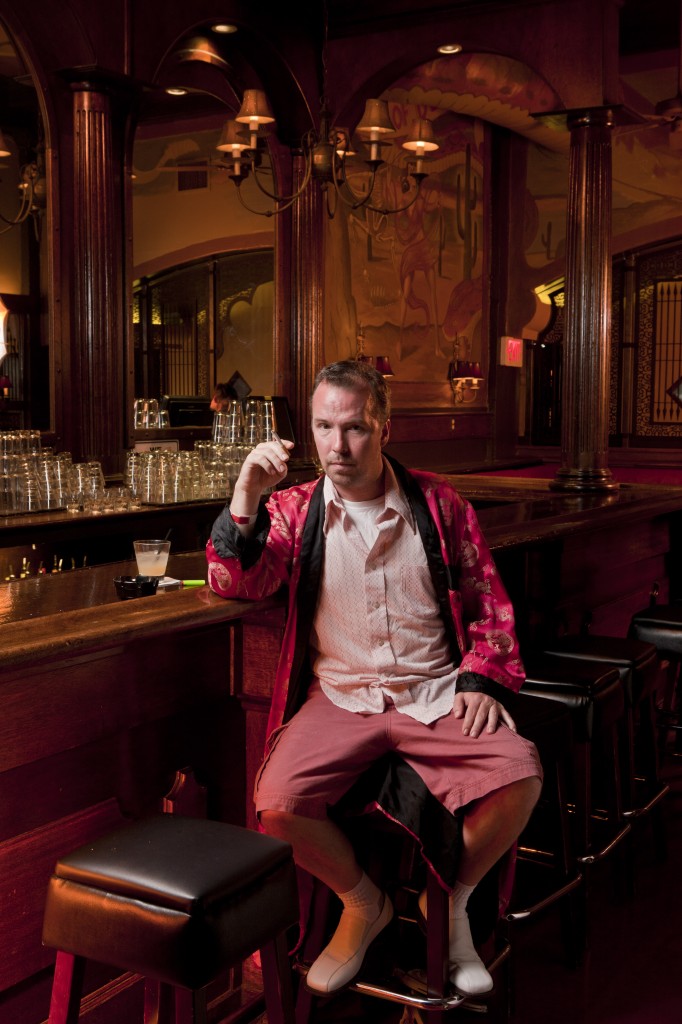 Stanhope had made a cameo appearance in an episode of Louis C.K.’s show Louie as a suicidal comic who was an old friend of Louie’s. Williams emailed Louis C.K. in admiration of the episode about a year ago and said that Stanhope’s character monologue regarding suicide was “the most poignant” speech of suicide he had ever heard.

From there Stanhope said that he liked to think that he was the inspiration for Williams’ later career. It is a line met with another mixture of laughs and groans.

Stanhope’s entire routine flows seamlessly, from topic to topic it seems more of a stream of consciousness through a dark and twisted mind rather than a professionally prepared series of jokes.

Stanhope brings up that he hates some people in media so much that he refuses to say their name, but he brings up the name Harvey Levin, founder of TMZ. He expressed such disgust for Levin that Stanhope said if he discovered the purpose of the Holocaust was preventing the existence of Harvey Levin, he would not be upset with the Nazis and he thinks the Jews could forgive the Nazis as well.

Stanhope discussed his issues with knowing anorexic people, explaining that if they still feel fat at 78 pounds then they must look at him as a complete slob. Mid-way through his bit, he talks directly to a front-row woman and said, “I don’t mean to keep looking at your legs as I talk about this… but they are damn sticks.” Laughter erupts but she keeps a straight face of disdain and her presumable boyfriend next to her struggles not to laugh.

Throughout the night I continued to spot the same girl, and she did not laugh even once.

Kids with cancer were brought up and he made his argument that bald men should be angry with the stigma that goes along with it in which healthy people are compelled to shave their heads in order to help children not suffer the horrors of a bald head. He ties this in with the recent trend of the “ice bucket challenge” for people suffering of amyotrophic lateral sclerosis (ALS, also known as: Lou Gehrig’s Disease) and the movement to raise money for the sick in which he criticizes it as well.

Stanhope addressed the split in the comedy community about rape jokes, where half say rape jokes “are never funny,” and the other half continue to use them.

It is obvious that Stanhope has no issue with rape jokes and cites the hypocrisy that mainstream media uses with rape in which it is okay to joke about a criminal headed to prison in which he may be raped, but a civilian is off-limits.

Around this time he has almost finished his two glasses of vodka, and asks one of the waitresses wandering in the crowd for a shot of tequila.

A few minutes later, the waitress brings him what is probably a quadruple-shot of tequila which he sips on the rest of the show and is visibly drunk the remainder of the night.

Being drunk does not hinder Stanhope and his performance. His seamless flow never wanes.

Mentally-challenged people were brought up and Stanhope outright exclaims that any religious person should medically be considered a mentally-challenged human-being. The crowd erupts in applause and yells of praise and was probably the most well-received statement of the night. 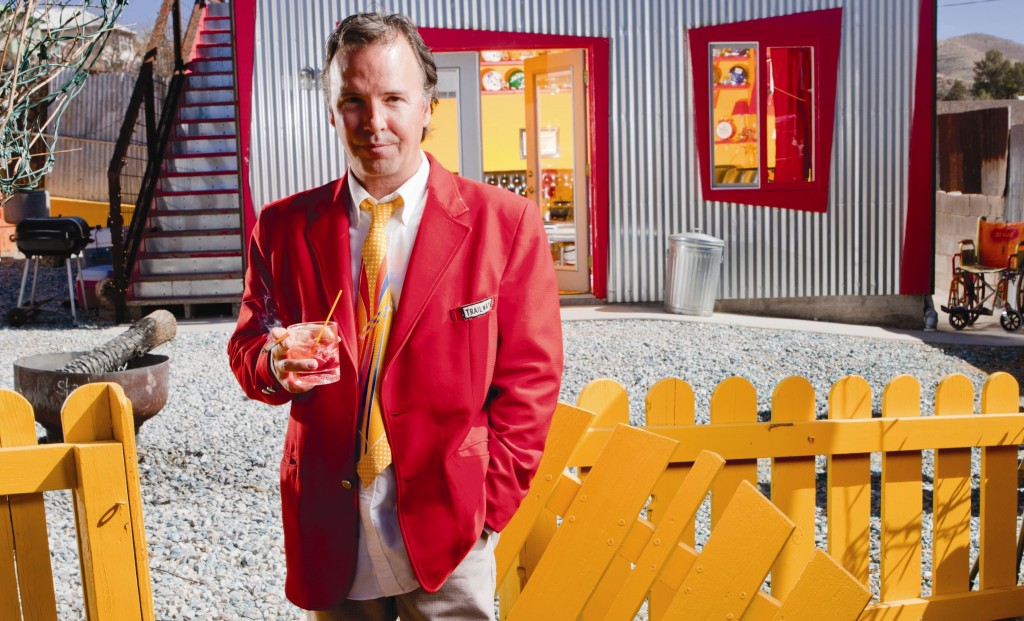 He brings up his long-time girlfriend, Bingo, who is sitting no more than five-feet behind me. Stanhope describes her as a mentally-disturbed person who gets treatment from someone that calls themselves a doctor, but they are not a licensed doctor.

The ridiculous advice that the “doctor” gives to his girlfriend is brought up and Stanhope ties that into a history which is described as, “Humans have almost always been wrong about everything in history.”

Stanhope explained that before a cure was found for polio by Jonas Salk, the thought was that cats spread polio, so the public used to round up hundreds of stray cats out in the streets to slaughter on a regular basis.

Through his stream of conscious style, Stanhope ties in mentally-disturbed humans to murderers and massacres of recent years, and then brings it to a focus of the police officer, Christopher Dorner, whom went on a near two-week long mission to attack fellow police officers and their families in 2013.

Stanhope explained that when he started stand-up comedy almost 25 years ago he never expected any fame or awards, but he would be proud to be in the manifesto.

After reading through the whole thing, he discovers that he is not on the list and he has been “snubbed.”
Throughout the show, I looked around the audience, and you could see the people whom did not know who Doug Stanhope was. Dozens of faces were unamused, uncertain, and uncomfortable amongst those in hysterics.

Getting near a full 90 minutes of stage time, Stanhope finally brings attention to the empty jug of vodka.
He talks about his shows and podcasts and how he was looking for a good sponsor, but he couldn’t sell any of the willing sponsors out there and his fan base wouldn’t buy them. 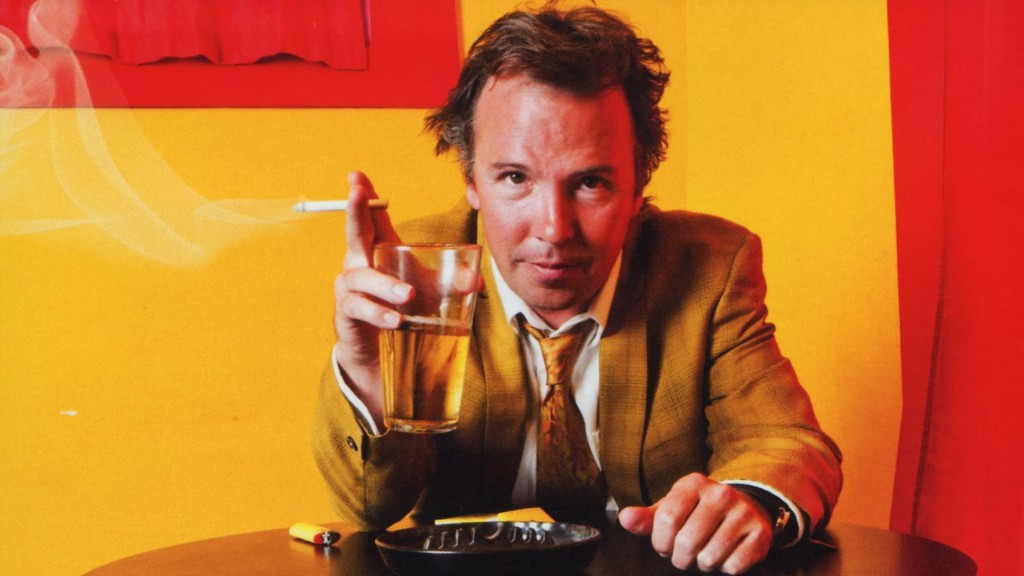 He said if anyone, a “bottom-shelf plastic-jug vodka” brand, “Popov,” would sponsor him.

To his surprise, “Popov” replied to the offer saying they wouldn’t touch Stanhope with a “barge pole, not a ten-foot poll, but a barge pole.”

In response, Stanhope decides to sponsor “Popov” vodka against their will during his act and announces to the audience that if they were upset or offended by anything he had said during the show that it was “Popov’s” material and they should write a letter to the company to complain.

Stanhope expressed his thanks to the audience, noticing that only two people walked out of the show to his surprise, and walks behind the curtains to end the show in a standing ovation of applause.

The amount of material that Stanhope fills in his 90 minutes on-stage is staggering and I merely presented a big preview of some of the topics he talks about and how much detail goes into each topic. My summaries could never do justice to the reality of watching Stanhope and listening to what he has to say.

For people whom have never experienced Stanhope’s comedy before, it may seem like his show are a wild trip of bleakness and scorn for life and human existence, but that would be missing the point.

His performances are an expression of uncensored truth in which he is willing to present to audiences in a truly fearless manner.

Those who connect with Stanhope can see that he is tapping into something more than “shock value.” He is throwing honesty into your face and speaking his mind without worrying about repercussions and that is something very seldom seen in people.

Almost 25 years in the stand-up comedy business and Stanhope still hits as hard as anyone around and usually hits harder. No topic is off-limits for Stanhope and no opinion is too harsh to express.

Stanhope is perhaps the greatest stand-up comedian today, arguably the most important. He is merciless, fearless, and unapologetic; and he is expressing that in one of the last true bastions of free-speech, upon the comedy stage.