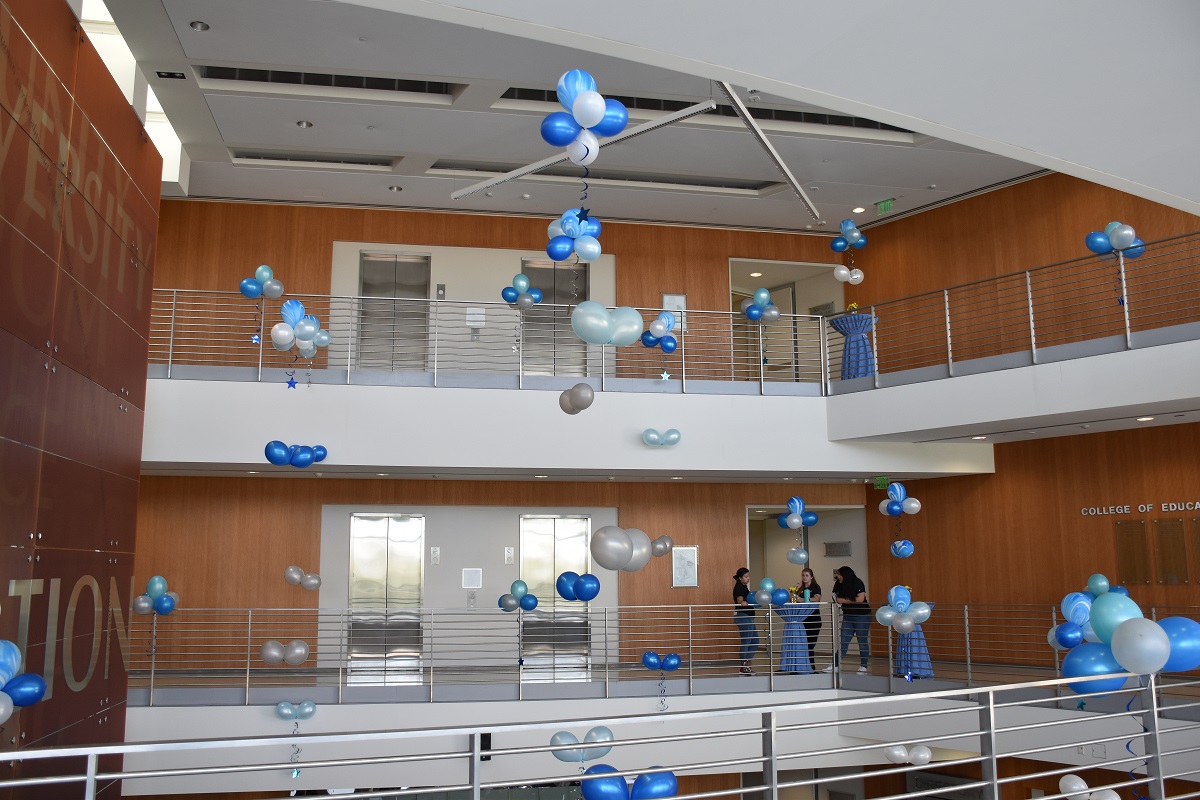 “Originally, it was a celebration. It was just a celebration of the residency in this building for ten years,” Interim Dean Jake Zhu said. “But, over the course of the (planning) it changed and evolved into many things.”

How then does a College of Education celebrate? With balloons, tassels, speeches and report cards it seems.

It was a graduation without the parade of names. There was even a celebrity commencement speech equivalent given by Brian McDaniel. The former CSUSB student was recently one of five California Teachers of the Year for 2018.

He spoke of his past, “I attended before this building was here,” he said.

Speaking to the future as well, he mentioned his plans to aid teachers in the Palm Springs district where he currently works.

Besides the speeches, there were plenty of other graduation-like touches. The three-story atrium was filled with blue and white balloons and alumni were given colored tassels based on which program they had graduated from.

The attendees meanwhile were busy getting a complete “report card” – which what the raffle sheets filled out throughout the event were titled. Guests were asked to visit three different College of Education programs to complete their ticket. Mario Castelleno was delighted to win one of the prizes at the end of the night.

“We didn’t call it an Open House,” Zhu said, preferring the term celebration. Still, much of the event had a back-to-school night vibe, with different programs sharing their work in different spots around the building.

Outside there was an Adaptive PE demonstration. There, Ginger Hartman shared her program developed with other CSUSB technology students. Also available were sound-producing sports equipment that have and will continue to allow the deaf to experience sports.

“I had one parent tell me their child had never run with a prosthesis before,” Hartman said.

Inside the building, Director Connie McReynolds shared the work of the Rehabilitation Counseling Program – particularly their experience with neural feedback. In this process, dozens of community children visit the college to play video games while an electroencephalogram (EEG) is hooked on their head to measure thinking. Only a few may know and understand that this software is designed to help manage the symptoms of ADD and other disorders, helping children with their audio and visual processing.

On the next floor up, San Bernardino school district’s Morgan Pelletera led a group of demonstration teachers in a variety of talks about teaching. These were attended largely by interested undergraduates who, earlier in the day, had attended a Celebration of Teaching event designed to sell them on the profession.

Though the event may have been put together quickly, there was enough time for photos, cake, a prize wheel, and much more.