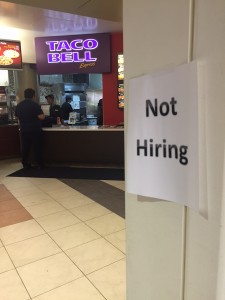 The underemployment rate for young college graduates is 7.2 percent and 19.5 percent for young high school graduates.

A recent study by Will Kimball and Alyssa Davis, economist research associates from the Economy Policy Institute (EPI), examine the labor market conditions facing high school and college graduates between the ages of 17 and 24.

“The class of 2015 is the seventh consecutive class to enter the labor market during a period of profound weakness,” said Davis.

The study shows that the unemployment of young graduates remains substantially higher than before the recession began in 2007, according to Yahoo Finance News.

“Though job prospects for this group are better than they were for the several classes that graduated before them, many recent graduates remain underemployed or idled by the weak economy. In other words, too many young graduates are unable to pursue the two major paths that lead to future career success, further schooling and employment,” continued Davis.

The wide gap between unemployment and underemployment suggests that a lack of job opportunities is either forcing young people to drop out of the labor force or take part-time jobs when they’re looking for full-time jobs, according to reports from the EPI.

Those graduates getting jobs are often taking lower-paid positions than in the past, with few prospects for higher paychecks in the immediate future. Many of the newly employed are taking jobs that do not require a college degree, calling into question whether the investment is still worth it, according to the Politico.

“You may not be able to control how much companies are willing to pay you or how many hours they schedule you for work. But you can adjust your expectations about the kind of work you might end up doing,” stated Alexandra Levit, cofounder of the Career Advisory Board, a think tank established by DeVry University.

Students also feel like there are other reasons why many college and high school graduates are having a difficult time finding jobs.

“Companies would much rather hire people with experience in the field and you cannot get hired unless you have experience in that job position,” said student, Joshua Dominguez.

The slow pace of the recovery means that seven classes of students have graduated into an acutely weak labor market and have had to compete with more experienced workers for a limited number of job opportunities.

Among both high school and college graduates, women in particular have been experiencing large declines in work hours and low wages, according to Yahoo Finance News.

In fact, graduating in a bad economy has long lasting economic consequences for the next 10 to 15 years; those in the class of 2015 will likely earn less than if they had graduated when job opportunities were higher,  according to the Politico.