After 13 long awaited years, the city of Redlands opened its first skatepark to the community on Jan. 26.

Mayor Paul W. Foster attended the opening day ceremony and gave a short speech followed by the cutting of the ribbon, officially making the park accessible to the public.

The funding for the park has been ongoing for years. Maureen Perez, also known as Mo, from Friends of Redlands Skatepark, has been a huge contributor for the past three years. Other contributors include the Tony Hawk Foundation, the original funder, and an organization called SK8Park.

The original organization was not involved during the past three years when Perez became the point person for the new effort to build the park; the organization still made a donation of $31,000 of an original $50,000 donation.

The donation was received from the Gardner Family, a skateboarding family that no longer resides within the area of Redlands.

Perez had applied for a grant from the Tony Hawk Foundation and received $25,000 to use for the funding of the park. Between Grass Roots Funding efforts and Friends of Redlands Skatepark, about $90,000 was raised while the rest came from city funding.

Perez is a beer buyer at Gerrards Market in Redlands. Thanks to his connections in the beverage industry, beer donations brought as much as $5,000 to the fundraising effort. Some say that beer built the park.

California Skateparks had been chosen to design the park. They hosted workshops where they got ideas from the public for obstacles they could put into their design.

“They had us take red dots and vote for certain aspects of what we wanted in a park and so it was heavy in the street section and it was a real fight to get them to build more transition into the park,” Perez said.

Perez was a huge advocate in having the best of both world in the skateboarding, street and transitional obstacles.

“I said I’m not going to fundraise for a park without a real transitioning, without a bowl,”
Perez said. “I know what these kids need in this community, but they also need the transition to challenge them to do bigger things.”

Local students will be able to enjoy free time with their families and friends since the skatepark is conveniently located close to the University of Redlands, and just about 16 miles away from CSUSB.

Over the years, Redlands has seen a lack of commitment to the park, causing delays to the completion. But Perez has put in great effort to execute the plans for the park completion. 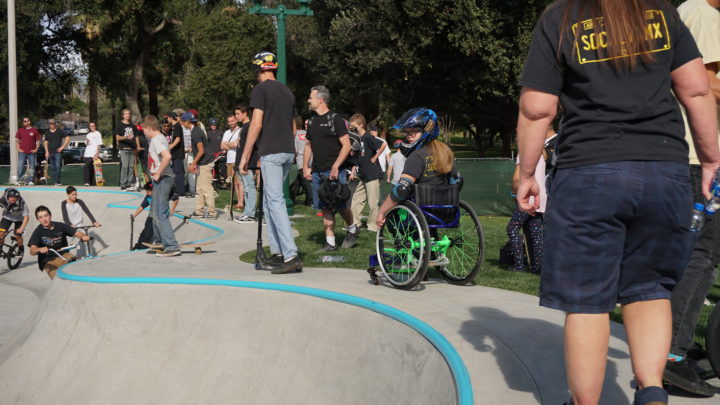 “I think it just didn’t have the right people involved with the dedication and the commitment to follow through on fundraising because just organizing an event, you know, it just takes a big commitment, it takes a lot of your time and I had to treat it like a full-time job,” Perez said. “I was the one who handled all the organization for the fundraising, handled all the funds, did the city council presentations,”

The construction for the park began just months prior to opening day. The builder worked quickly and surprised the city by finishing ahead of the scheduled time.

The park will be an open park and all types of riders are welcome to enjoy. Whether riding a scooter, a bike, rollerblades, or a classic piece of wood and four wheels, students, families, and friends will be able to enjoy the park as a community.