The lack of representation and weak recruitment of Pan-African/Black students causes the number of Pan-African students to dwindle, said campus community members.

CSUSB has two labels: one being a diverse campus, and the other being a Hispanic serving institution (HSI) due to the fact that the campus has a Hispanic population of over 60 percent. 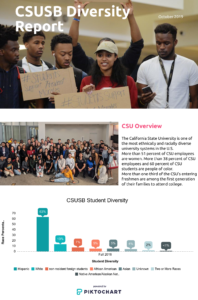 Student Engagement Coordinator, Jane Rodriguez, stated that she does not feel that there is enough representation on campus.

“I think being a Hispanic serving institution it would be great to see more diversity when it comes to upper administration or individuals that are in more leadership positions,” Rodriguez said.

The Office of Diversity and Inclusion features an interesting mission statement from their Council on Diversity, Inclusion, and Equity.

The council, “promotes a diverse, inclusive, and equitable community and climate at CSUSB and community,” as stated on their online page.

Matthew Foster, president of the Student African-American Brotherhood, finds serious importance in the community portion of that mission statement.

Foster wants to advocate for the community by reaching out to as many students as possible.

“I think one thing that can be done to improve representation is to make an emphasis on going out to the high schools,” said Foster.

He emphasized the fact that the campus is surrounded by high schools such as Cajon, Summit, and other schools with African-American students.

The campus has been receptive to these claims by creating a staff position on campus that will aid in not only recruitment in this area but success for this demographic.

Evelyn Knox serves as the coordinator for the newly formed Pan-African Collegiate Scholars Program, which looks to be a source of support and academic success.

“The program is designed to support retention and graduation rates for Pan-African/Black students,” stated Knox.

As someone who has served the campus community for more than 10 years, she has seen the activism side of race not being represented properly on this campus.

“I like that our folks can put issues on the table and I do believe our administrators… would have a willingness to come to the table for any issue and try to resolve it,” Knox said. 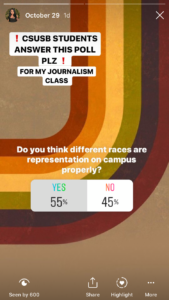 Student leaders and administrators feel that because of a lack of representation, people’s view of the institution can be broken.

Associate Director of Operations for the Santos Manuel Student Union, Anthony Roberson, has witnessed the effects of this issue throughout campus and feels that there is still plenty of work to be done as far as representation goes.

“I feel like we are a very diverse campus. I know we are a Hispanic-serving institution, but I feel that under the leadership of President Morales, we are making a conscious effort to make sure that our faculty and staff reflect our student population here at CSUSB,” said Roberson. 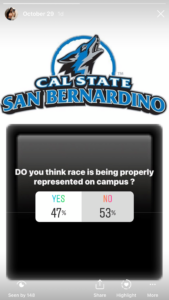 Robertson believes that faculty and staff are the backbones of the university making sure that the students have resources and guidance.

Some students feel that without representation among faculty and staff,  potential students will be discouraged from coming to CSUSB.

Miguel Zamora is a Hispanic student who is an aquatics supervisor for the Recreation Wellness Center and sits on the committee for the Rec wellness center while also serving as the secretary for the Student African-American Brotherhood.

Zamora believes that representation on campus can be much better than what it currently is.

“For Hispanics, I feel like they do a decent job of representation with the different clubs and events that they host on campus, but definitely not for the Blacks and Pacific Islanders. I feel like there are not enough resources for them and not enough events to highlight their culture,” claimed Zamora.

Even though Rodriguez is Hispanic she believes there should be more representation of different races on campus, not just of African-Americans, but other minorities as well.

Rodriguez said, “I think it’s interesting living in that climate that we are in right now like politically, just having like supporting certain candidates makes you feel like there are certain things that make you feel like you’re not safe in certain spaces and I think that in itself is a racial injustice because we should all be able to be comfortable in any space that we walk into and not feel threatened or that were just not safe.”

Her goal is to not only expand the representation of races but to also make them feel as if they are welcomed because in reality they should all feel welcomed regardless of their race.

Though CSUSB sets the standard for what a diverse campus should look like, the representation component still needs improvement as the campus makes strides to please every demographic.