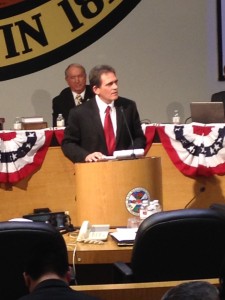 Carey Davis San Bernardino’s new mayor was sworn into office on Monday, March 3 in front of a packed city hall.
Although the new mayor has no political experience, he feels his lack of experience is an advantage.
One of Davis’ goals is to attract small businesses to downtown San Bernardino.
He hopes to, “Collaborate with our city’s education and business leaders to formulate a plan to educate and train a skilled workforce,” said Davis at city hall.
Davis wants to improve San Bernardino’s economy and work at improving the downtown San Bernardino area as well.
“I think one of the biggest issues with politics in today’s government is a lack of a business mindset. We are looking for a new mayor who is good with politics, but what we need is a business oriented individual to turn this city around,” said student Michael Dandurand.
Davis is a former accountant and believes that he can save the city of San Bernardino from bankruptcy.
However, some students are worried about the newly elected mayor because of his prior accounting profession.
“One problem that I can see happening with an accountant as a mayor is that accountants think in numbers, not in human interest. I worry that programs will be taken away that help others in order to maintain high numbers,” said student Robert Ramirez.
There is also some skepticism on electing a mayor with little political experience.
“San Bernardino is bankrupt, the result of costly pension obligations and a tax base that evaporated as businesses fled. Crime has risen and residents say basic city services aren’t being delivered. Roads are packed, parks poorly maintained,” according to The Los Angeles Times.
“Stabilizing San Bernardino’s economy is a high priority for the city, so with the background experience with our incoming mayor, I feel this is a fresh perspective that the city has been craving,” said student Cindy Todorovich.
“Alternatively, the city has other long standing issues to face and I hope Mr. Davis will be able to adapt to the politics in the holding office,” continued Todorovich.
Davis assured San Bernardino residents that he will help improve our economy.
“Rebuild our city into a prosperous and industrious community,” said Davis.
Benito Barrios and Henry Nickel, two new councilmen, were also sworn in on Monday.
Both councilmen are also hoping to bring change to San Bernardino.
Fred Shorett and Virginia Marquez, former San Bernardino wards, were sworn in to new terms.
Davis has big plans for the city of San Bernardino. He and his councilmen are already working on and hope to see positive change for the city.
“I look forward to working with educational, religious and community leaders and building a brighter future for our prosperity,” said Davis.