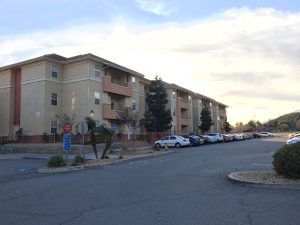 CSUSB has had its’ share of on-campus crime in the past, whether it is carjackings, theft, or assault, but the hijacking attempt of last Tuesday intensified some of those fears.

Armed with facts Coyote Chronicle set out to investigate how secure CSUSB students feel on campus and what measures are being taken to ensure their safety.

“For the most part I do feel safe on campus when walking around during the day,” said student Daniel Cedeno. “I know there are cops making their daily patrols, I think they should increase their night presence on campus.”

From the beginning of the year until present there has been two cases of burglary, four cases of larceny-theft, which is the theft of personal property, two attempted burglary incidents, one stolen vehicle and one carjacking, according to campus police.

Earlier this week the CSUSB police were on the lookout for a carjacker and kidnapping suspect, the victim was brought to safety but the suspect was not apprehended.

Due to the fact that this in an ongoing investigation, the campus police are not at liberty to discuss further details but are still actively searching for the suspect.

However, the Office of Strategic Communication did say that one thing that helped campus police is that there was a witness who spoke up and notified them that they saw someone matching the suspect’s description.

CSUSB takes a number of precautionary measures to provide protection for everyone on campus.

There are ongoing patrols throughout the campus by car, by cart, there are foot patrols and the CSUSB Police have a mutual agreement with San Bernardino Police and the Sheriffs Department on the mutual response so if we need their help they are here, according to the Office of Strategic Communication.

“Back when the San Bernardino shooting happened two years ago in December, two of CSUSB’s officers were among the first to respond in San Bernardino to help out,” said the Assistant Director of the Office of Strategic Communications, Joe Gutierrez.

The school is also quick to alert all students and faculty on campus via email, text and twitter, whenever a crime takes place or a suspect is on the loose to make sure they are aware and on the lookout.

“I feel safe and comfortable on campus,”  said student Hannah Centner. “I often see police cars patrolling and I like that they send out notifications whenever an emergency happens on campus so that we are alert and aware of our surroundings.”

The school also incorporates incoming student orientations, sessions about how to be safe, how to contact the campus police if needed or if they feel like they want to be walked to their car for safety reasons.

The campus campaign on crime is based on if you see something, say something.

“The campus police and campus security officers do everything they can, but It is up to everybody to take the precautionary steps to avoid problems and if they see something to say something,” said Gutierrez.

To help keep our campus a safe environment, the Office of Strategic Communication urges everyone on campus to report any suspicious activity.