California attorney Matt McLaughlin has proposed an act that, if passed, will make sodomy between same-sex individuals a capital crime, according to Snopes.com.

McLaughlin proposed the “Sodomite Suppression Act,” which was received by the state’s initiative coordinator at the Office of the Attorney General on Feb. 26 with $200 and initiative certification enclosed. It hopes to make it legal to execute gay individuals, according to The Huffington Post. 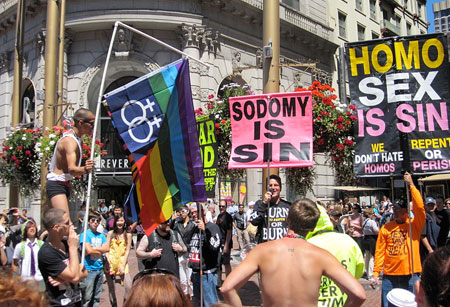 The “Sodomite Suppression Act,” which McLaughlin has sent to the state Department of Justice, will not only punish gays but also those who engage in sodomy, according to the the act’s initiative.

One of the first lines in the proposal states: “Seeing that it is better that offenders should die rather than that all of us should be killed by God’s just wrath against us for the folly of tolerating wickedness in our midst, the People of California wisely command, in the fear of God, that any person who willingly touches another person of the same gender for purposes of sexual gratification be put to death by bullets to the head or by any other convenient method.”

“This proposed ballot measure reminds me of a more intense version of the Briggs Initiative from the 1970’s. It’s clear that this sort of legislation would never pass, but it is saddening to see that some people still hold narrow-minded opinions,” stated the Pride Center’s Lead Program Assistant Jorge Rivera.

The initiative also expresses that “no person shall distribute, perform, or transmit sodomistic propaganda directly or indirectly by any means to any person under the age of majority.”

The act also stressed that “sodomistic propaganda” would be punishable, according to the act’s initiative.

The act’s initiative defined “sodomistic propaganda” as “anything aimed at creating an interest in or an acceptance of human sexual relations other than between a man and a woman.”

According to the act proposal, sodomistic propaganda can be punished by a $1 million fine, a 10-year imprisonment, or life-time expulsion from the state of California.

The act also would make it illegal for anyone who is gay or has engaged in sexual activity with another of the same-sex to be in public office.

To get the “Sodomite Suppression Act” on the 2016 ballot, McLaughlin must acquire approximately 400,000 signatures, according to dailykos.com.

“The LGBTQ community has made wonderful progress in the past few decades and still has a far way to go; this sort of hatred and intolerance is a reminder that the queer community needs to keep its momentum,” stated Rivera.