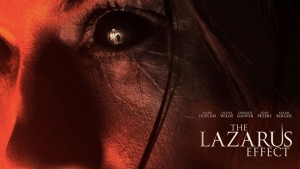 “The Lazarus Effect” looked promising but failed to bring life back to Hollywood’s dull but profitable mainstream horror genre.

On my way to see “The Lazarus Effect,” expectations weren’t too high. Horror movies have been disappointing lately and after watching the trailers, I expected a generic modern day recreation of the classic Frankenstein story line.

What managed to get my attention was the cast members. “The Lazarus Effect” brought the striking Olivia Wilde and Mark Duplass for the leading roles, along with the multi-talented, Donald Glover, also known as rapper Childish Gambino.

So far, “The Lazarus Effect”’s $3.3 million budget has brought in $12 million, ranking fifth in the box office.
With this list of decent actors and a strong opening weekend, I thought I would be in for an adequate horror movie. If it ended up being another mindless slasher film, it would have been alright because I never expected anything more than that.

The film revolved around a group of scientists who are experimenting with a serum that would bring the dead back to life in the hopes of giving doctors more time to work with patients.

The movie started off really good. By introducing themes of life and death, the risks we take with technology, the struggles of relationships, and the infamous science versus religion debate, “The Lazarus Effect” appeared to be going in the right direction.

But after a very promising start, the second half of the movie turned into a lazy recycled slasher film that left me completely disappointed. About halfway through the film, Wilde’s character dies and Duplass makes the decision to bring his girlfriend back to life, but she comes back acting very strange.

At this point, you assume she’s evil and assumptions are proved true as she flies around killing people and crushing things with her demon powers for what felt like hours. I could have literally walked away from the theater right after they brought her back to life and been much happier with the movie.

What left me the most disappointed was that the producers ruined what was actually a good start to a movie. That’s where they screwed up because the beginning of the film raised my expectations, expectations that were slowly killed during the second half of the film.

Overall, “The Lazarus Effect” starts with lots of promises, leaving you hopeful that it might have a little more to it than the usual horror film.

Unfortunately, it ends up being another teenage piggy bank robbing movie that at the very least meets expectations from the main stream horror genre.