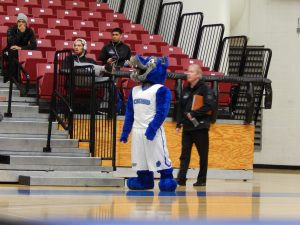 With just one month left of the men’s and women’s basketball regular season, the Athletics Department (AD) has revealed multiple giveaways and theme nights to fill Coussoulis Arena for the Coyotes final push for the playoffs.

The AD worked with ASI to “Pack the House” against the San Francisco State Gators and it was a huge success. The stands were packed for both the women’s and men’s game on Jan. 18.

Food, music and giveaways galore were offered to students to entice them to enjoy a ball game or two.

The AD also offered students a chance to win $2000, in addition to free cheeseburgers and Coyote basketball shirts available.

In a contest called Shoot for Loot, one fan picked from a raffle just before halftime, was asked to shoot a basketball from half-court. If they made it, they would win the big cash prize.

Neither of the fans that shot at either halftime took away the grand prize. They did get consolation prizes, though.

For those who did not attend the first Shoot for Loot event, there will be two more opportunities to enter.

The success of Pack the House was quickly followed by Military Appreciation Night on Jan. 21.

The AD and the Veterans Success Center worked together to show CSUSB’s appreciation for current and former members of the military.

Fans of all ages came to show their support for the military during the game.

On the court, the Jazz Ensemble sang the national anthem before both games with a color guard in tow. The second time the anthem was sung, a giant flag was brought onto the court by the ROTC.

A group of Army recruits were sworn in during the first halftime, and the military junior ROTC drill team performed a few dance numbers for the second halftime.

Coming up on Feb. 17 will be “Palm Desert/Faculty Appreciation Night.”

In addition to a Coyotes hat giveaway (first 100 fans), the Coyotes will be hosting a canned food drive. The hat will be black with “Coyote” written in cursive.

The following night, Cal Poly Pomona comes to town. This marks the return of “Beat the Broncos” night.

The first 150 fans in attendance will receive a drawstring bag featuring the Coyotes logo and will also be able to enter in the Shoot for Loot contest.

Multicultural Night will take place on Feb. 23 and will feature the celebration of multiple cultures as well as a mini basketball giveaway complete with the Coyote head logo.

“This is a night that we are inviting all campus groups to come and table in the Arena and promote their group,” said Scott Carlson, the Athletics Department Executive Marketing and Development Coordinator.

“Some campus groups are also performing at halftime as well,” added Carlson.

For the final home game of the season on Feb. 25, the Coyotes will be giving away a white Coyote basketball shirt. The final Shoot for Loot of the season will also take place.

While there is still time left, come out and support the Coyotes basketball team and enjoy the extra perks of the giveaways and theme nights.