Endgame”, coming out in theaters everywhere on April 26. Fans did “whatever it takes” to be one of the first people to purchase tickets to watch the most highly anticipated movie of the year.

Fandango tweeted that when the tickets went on sale April 2, the website sold five times the number of tickets that it did for “Avengers: Infinity War”. “Endgame” is officially now the record holder for most tickets sold on the first day of availability – an accomplishment that “Endgame” pulled off in six hours. 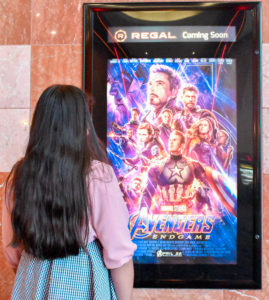 Numerous people wanted to buy a ticket which leads to Fandango creating a waiting room for movie buyers –  something that Fandango has never done before. A few students at California State University, San Bernardino were lucky enough to get a ticket, however, it took quite a bit of time.

William Aguilar, a business major, waited over an hour to get his tickets.

“I have been waiting to see this movie ever since the trailer came out. When the tickets came out today, I didn’t care how long I would have to wait.” William said. “I was not surprised to wait over an hour because I know a lot of people want to see this movie.”

Much like how Thanos snapped his fingers and half of the universe vanished, so did the servers on major movie sites, such as AMC.

Fandango played their cards right by creating a holding room for movie buyers to wait their turn to buy a ticket. This prevented their servers from crashing.

Alexander Alvarez, a communications major, also experienced a bit of a wait time.

“I thought I was going to get my tickets right away, but then I saw that I had to wait over an hour and a half to get my tickets,” Alexander said. “I ended up waiting because I know if I do not see the movie on opening weekend, the internet is going to spoil it for me.”

Marvel fans are anxious to see if their beloved superheroes are going to come back in “Endgame”, and nothing is stopping them from watching on what is confirmed now a three-hour movie.

When Alexander and William were asked to see if three hours is too much, the time did not seem to phase them. “Oh, I am happy it is three hours. It can be five hours and I will still watch it.” Alexander said. “I just better not drink a lot of water before because I am not trying to go to the bathroom during the movie.”

William, who is taking his girlfriend to see the movie, expressed some rules that he gave to her.

“I told her do not ask any questions during the movie, only laugh and clap when it is appropriate. She knows how serious this movie is for me.”

Just like William and Alexander, fans can’t wait to see “Endgame”. A three-hour long movie with no intermission, and on April 26, the world will find out how this long journey of Marvel superheroes will come to an end…or will it?