An attempted sexual assault at CSUSB‘s Pfau Library was reported by a student to University Police on Wednesday, March 4, at approximately 7:30 p.m.

The assault occurred in the Library’s north stairwell. The victim was able to resist the suspect, who fled the scene. 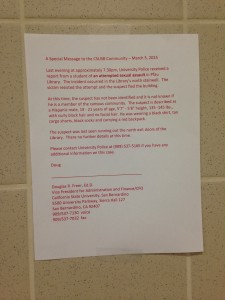 Vice President for Administration and Finance, Douglas R. Freer, released a statement describing the suspect as a, “Hispanic male, 19 – 21 years of age, 5-foot-7-inch to 5-foot-8-inch height, 135 -145 pounds, with curly black hair and no facial hair.”

The suspect was reported to be wearing a, “black shirt, tan cargo shorts, black socks and carried a red backpack,” according to Freer.

Flyers detailing the situation were posted around the campus, and an e-mail was sent out to students, faculty, and staff.

University Police have requested that all students and staff report any information on the incident at (909) 537-5165.