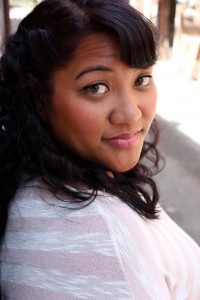 Ashylnne Macan will be a great addition to the graduating class of 2013. She will graduate with a bachelors in Mass Communication and Public Relations.

She chose CSUSB because it was close to home, but she quickly became involved with the clubs that the campus had to offer.

As a sister of Delta Sigma Chi Coed Fraternity Inc., Ashylnne has done her fair share in contributing her time and energy to the fraternity. She has held numerous positions, but most importantly she was president during 2010-2011.

Ashylnne feels a big part of her success has been from the professors on campus, in particular Professor Donna Gotch.

She talks about how Gotch has been one of her biggest mentors in college, “Her vivacious attitude, and willingness to help students literally made me take every class offered by her. She also helped advise me with my schedule,” said Macan.

She mentions Dr. Sheil as being very knowledgeable and relevant to student’s involvement in class. “I will never forget her quote ‘Work it! Work it ‘til it hurts!’ She wants to make sure that we succeed and take every possible chance and opportunity that becomes available.”

Ashylnne says her thank-you’s to Dr. Bahk and Jim Smart, for the opportunity to learn something new and the knowledge to understand the techniques of becoming a well rounded journalist.

Macan works at the Coyote Radio and sends her appreciation to the staff in charge.

“Lacey Kendall and Penny Drake-Green, you’re the most awesome people to work with! Penny thank you for running the radio class, because without it, I probably would not have found my “niche” and realized what I wanted to do. Lacey, you are such an inspiration to me and have always helped me better my skills, taught me what I needed to learn, and let me be your right hand woman. Thank you for being there.”

Ashylnne offers words of encouragement to those looking for internships. “I took the Disney College Internship in Orlando, Fla. It was an amazing experience that I strongly encourage anyone to do!”

After graduation Macan will be working as an event coordinator for pageants in Victorville and plans on getting her masters degree at UNLV for Human Resources or Public Administration.

It has not only been an honor, but a privilege to have gotten close to such a gracious person with a lovely attitude.

Good luck in the real world my friend, my sister and mentor!